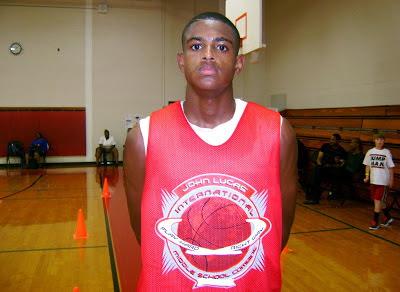 Once again I came away from the John Lucas Middle School Combine's highly impressed with the talent in attendance. You have kids representing over 25 states as far as Hawaii. Just like in past years I saw quite a few kids that will be impacting their high school teams immediately. So below is a handful of kids that I saw play and stood out to me:

Darren DJ Harvey 6'5 Owens Cross Roads, AL 2017: Another player in the camp who's upsides tremendous. He got up and down the floor with the guards and played above the rim. Has loads of potential and if he comes close to it that spell special.


Marvin Wilson 6'4 Houston, TX 2017: The camp bruiser. He played through contact and finished strong. His intensity was one of the best in camp. You could tell he treated this as a statement camp, and yes he made a statement.

Marcus Shaver 5'11 Honolulu, HI 2017: Marcus came across the water to make a statement and that he did. He has all the tools to be a great PG. He leads the team, shoots the rock from deep and gets to the rack.

Craig Roberts 5'11 Irving, TX 2017: Craig my type a guard a bully and that's a compliment. He's going to get to his spot, whether around you are through you. For ya'll in the Dallas area he reminds me of a young Byron Mouton, who was a stud in football and basketball.

David Beatty 6'2 Philadelphia, PA 2017: He has a chance to keep that Philly point guard tree going. He stays going to the rack and a little contact didn't bother him. His jumper was up and down but you can see the stroke is there.

RonQuavious Southward 5'9 Saginaw, MI 2017: He had a little flair for the game. He played with that Midwest toughness you expect from a Michigan kid. He can handle, and get to the rack at will. I like his tenaciousness on both ends of the court.

Joseph Jones 6'4 Buffalo, NY 2018: He so big and strong. As of now he has that baby Huey complex, sometimes doesn't know his own strength. He showed soft hands and mobile feet. When he sheds the baby fat his game should sky rocket. You can see flashes of his brother’s genes in him the NBA's number 1 pick 'Greg Oden'.

Ladarius Marshall 6'5 Jackson, MS 2018: When I see him play, he had San Diego State star 'Winston Shephard' written all over him. He guarded all five positions and was windex on the glass. He ran the floor like a cheetah. Even though he's not as polished 'Winston' at this age the potential is there.

Christian Popoola 6'2 Las Vegas, NV 2018: Pop is a tenacious defender who plays with all out effort at all times. He has a nice lefty stroke and he attacks the bucket with ferocity. He has a good feel for the game which is hard to find in kids his age that play off the ball.

Jordan McCabe 5'8 Combine Locks, WI 2018: It was my first time seeing McCabe play after hearing so much about him. He has terrific handles and a sweet stroke. My only worries with all the media hype he wants more flash than substance. He looks more for approval from crowd than coach. If he polishes his game to be a pure point he has special all over him.

Tyger Campbell 5'9 Austin, TX 2019: Being the only 6th graded in camp the young fella showed he belonged. He had excellent ball handling skills and blow by speed. He showed good on ball defense which resulted I'm numerous pockets being picked. He has a inconsistent jumper, but he's only a 6th grader, not much to pick on.