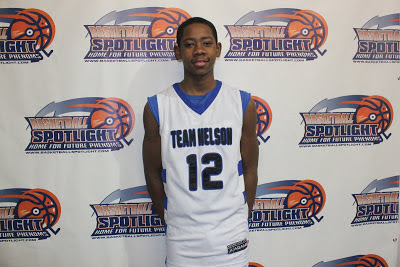 The 6th Grade Division gave us a chance to see some serious talent. Here’s Part 1 of our top performers from the rising 7th Grade Class.

Mikeal Jones Forward (Team Nelson)- Well the best prospect in the region didn’t disappoint. He averaged close to 20 points a game and was a terror on the boards. His post moves are polished and when he’s motivated he’s there’s no one in the gym that can slow him down. Before the game he told they would win it all and he delivered.

Namir Tyler Forward (Team Nelson)- I might have to start putting guard by this kids name because is perimeter skills are definitely developing. His ability to play offensively and guard the perimeter brings a new dynamic to this huge squad. Once his confidence gets better while pushing the rock and making decisions he could become scary.

Mark Bradshaw Guard (Team Nelson)- It was a usual weekend for the combo guard. He was outstanding during the semifinal as they ran passed RJS. In transition he’s just too much to contain on this level and once he gets his pull up jumper automatic he will become even more dangerous. Right now he drifts a little too much on his jumper but he’s only a 6th Grade so they will be fixed.

Donta Scott Forward (Team Nelson)- The inside clog also has been developing his perimeter skills but when its money time he understands it’s time to return to the paint. He’s become more nimble on his feet and a better leaper. He will help them tremendously at the Nationals.

Chris Allen Guard (Team Nelson)- Allen was more known for his shooting but he had to take over the point guard duties for injured teammate Kasim Tolliver. Though he’s not a natural at the position as Tolliver be still was able to manage the game and make sure his scorers got the rock.

Terrell Martinez Guard (RJS)- Martinez gave a good effort trying to break Nelson’s pressure. I was impressed with his court vision and willingness to pass the pill. Some of his passes were too advanced for his teammates and he looks much better when he plays under control. At times he seemed to try and do too much with the pill. But he’s only a 6th Grader so the game will eventually slow down.

Nate Coovyer Forward (RJS)- Nate was another player from the Burlington County squad that showed promise. I like his size and the energy he brings on the floor. He’s still a little raw but the potential is there.
Posted by basketball spotlight at 2:30 PM