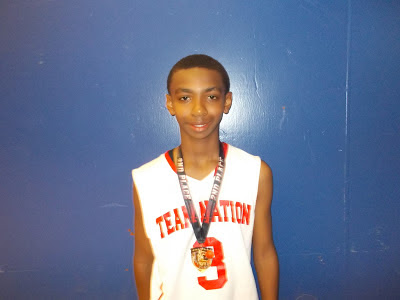 The 5th Graders gave us a great show at the Grand Finale Final Four. We definitely look forward to watching them play over the next three years. Here’s Part 2 of our look at the top performers from this grade level.

Trey Patterson Guard (NBA)- Patterson has been performing like the big man on campus all year. Few 5th Graders in the country possess the size and skills that he has in his arsenal. He’s skill enough to dribble through a press and make the correct pass while also being strong enough to launch three pointers from the cheap seats. As the years go on I see him being a mainstay on this website.

Nashawn Holmes Guard (NBA)- Holmes simply demolished Team Glory in the semifinals. They had no answer for him inside as he dominated the glass. Nashawn is not long but his power could not be matched in that contest. I also liked the way he showed off his floater and touch around the basket.

Haj Parland Guard (NBA)- This guard had many spectators leaving with his game on their mind especially after his semifinal performance. The pint size guard not only can score the pill but his court vision is serious for a 5th Grader. He understands how to stay away from traps and usually makes the correct pass. When his strength and size catches up with his basketball IQ someone will be in trouble.

Jakari Spence Guard (NBA)- The pesky guard pressures the rock well and has a ratchet that he will let go from deep. He loves attacking the basket from the wing and jumping into the chest of defenders before scoring. He and Parland make a tough back court.

Zion Harmon Guard (Team Glory)- “The Lion” gave his best to try and win the banner but came up short in the semifinals. NBA defensive strategy forced him to launch very deep shots from the perimeter. When he was on he gave the crowd a treat but the fatigue factor begin to set in and his shots started falling short.
Posted by basketball spotlight at 10:06 AM