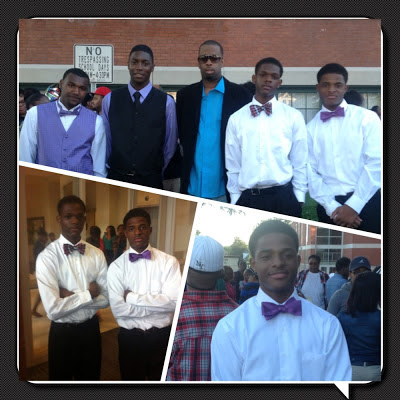 This was a very good week for me. The week started with me graduating from Sarah J. Rawson Middle School. This was a big deal to my friends and family because so many people in my circle all attend the same school. Most of us have been going to school together for so long, this was the final step before high school. Me, my brother, Ismail and Vincent have been through it all and I'm glad we all got it together in the classroom and walked across that stage together! It felt great to make my Mom proud! She's been through a lot with me and my brothers and sister so I love to make her smile every chance I get. Our house burned down earlier this year so we have gone through a lot as a family, but we got through that just like we get through everything else. My coach always says we are built different than other kids, I believe him!


Another great thing that happened this week is that my cousin, Dejane "Snoop" James got her first official D1 offer! I feel so proud because we have been playing together since I was 5 and me and my brother Chaylyn always looked up to her because she was better than us. She always played with boys. I remember when we first came down to Basketball Spotlight and some coaches didn't want her to play because they said she would get hurt, lol! I think she had about 17 in the first game against Team Battle! There were a lot of great players on that team, I won't name anybody, but she was giving a lot of them that WORK! I was on the bench just happy to be her cousin...now she's still doing her thing on the court! All of us who started out with CT 300 are growing up and making noise everywhere we play. Funny thing is we all kinda play the same, we all play HARD! That's how Coach Reg teaches the game, I wouldn't want to play for any other Coach.

The week ended with us going down to New Jersey for the Grand Finale. Thus was our final Basketball Spotlight tournament. I was pumped to play because we have never won the Grand Finale banner before. Last year we lost because of my attitude and I got benched. That was a hard lesson but I really wanted to make that up to my teammates and coaches. Plus, I really wanted to play against Jamir Harris again because he's the best player I faced this year. He got the best of me at the Hall of Fame so I wanted the chance to play against him and the NJ Playaz again. They lost to New Heights so we didn't get to play, but New Heights is a very good team too so it was all good. We beat Milbank in our first game. They beat us the last time we played so it was good to get back to our winning ways. We play them so much it's kinda normal now. They were missing players but so were we the last time we played. Everybody knows you gotta have all your guns when you play at Spotlight.

In the championship we lost to New Heights in a very good game. They got way better over the year since we beat them at FunSport. Keith Williams is another one of the great players I faced this year. My coach always tells me to make friends with the guys who I love facing because you never know if you might end up at camp with them or even as college teammates. The guys who bring the best out of me besides Keith and Jamir are: Nate Pierre-Louis, Quade Green, Chris Lykes, Jamir Moultrie, Trevon Duval, DJ Mitchell and a few others. I had a okay game in the championship against New Heights, but I wasn't able to get my team the win. My brother caught his first 2 hand dunk in a game though, that was a good moment. Riding on the van home I got kinda sad thinking about the fact that we won't be making that trip anymore. I was looking at all my teammates that been here since day 1, looking at all of the new teammates, and thinking about all the other guys who we introduced to this Spotlight life...and it made me smile.

In AAU, it's different levels to this (Meek Mill) and we was on this level before a lot of teams in our area was on it. I love that I was a part of that. We took some losses, but I can honestly say I have a winning record against most of my competition. I played with and against some great players and coaches. I've seen some guys that were tough, and some who were scared of me. But overall, I gave out more headaches than I got. I love BBallSpotlight for giving us a chance to prove ourselves, and I will never forget what happened here!
Posted by basketball spotlight at 9:51 AM