One One One Feat. Luther Muhammad (Team IZOD) 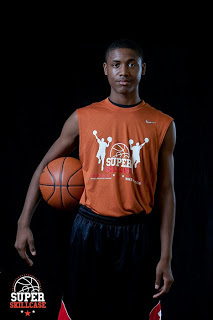 Luther Muhammad won Player Of Year honors last season while leading King Street Kings to the Grand Finale championship. This year he moved over to the “Supreme Team” and helped them win the Tip Off Classic and a #1 spot in our rankings. We contacted Luther for a little conversation and here’s what he had to say.

BS: What are your goals for the season?
LM: I look forward in to winning a national championship.

BS: Who is your favorite player and why?
LM: My favorite player is Kobe Bryant because we play the same position, gets people involved, score when needed, and play defense.

BS: What is the strongest aspect of your game?
LM: The strongest part of my game is my defense on and off the ball.

BS: What was your fondest moment at Basketball Spotlight events?
LM: My biggest moment at spotlight is last year play against Team Izod late in the fourth quarter we down by three in the championship and i hit a three to tie the game up.

BS: Give me one word to describe your game.
LM: Challenging.

BS: Give me one word to describe Basketball Spotlight events.
LM: Exclusive.
Posted by basketball spotlight at 10:23 AM