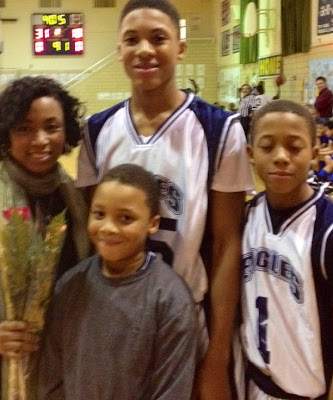 Nate and Family on Senior Night

Hello basketball world I had an awesome week and here’s how everything went.

First of all I would like to thank all of the great Presidents. Monday was Presidents Day and usually we have the day off but not this year. We played against St. Patrick’s and they are loaded. They have Ray, Patrick and Khalif from Team IZOD and Marcus and Jamir from the Playaz even though Jamir was out. My team played solid and with all their talent we only lost by 11. I’m proud of my teammates and the way they fought especially my brother Josh “The Jet” he had a good game.


Tuesday was just a normal school day. I enjoyed Spanish class because Mrs. Alvater is teaching us about verbs. I’m happy about learning a new language and know that I will need it in the future. When I walked the halls everyone was still talking about the way my brother and I played against St.Pats. After school I went home took a nap, woke up to eat and went back to sleep again.

Wednesday was a long day. I went to school and had THE Math block which is always long. The bright part of my day was practicing our Black History dance in Social Studies. We got the dance from a movie we watched entitled Sarafina. It’s a black history movie about apartheid and very interesting. After school we went to Joshua’s game and they played well against an older group. Next we went to look for a new car from my family. We were all out there for about four hours (exaggerating) but it was freezing. When I got home I was so tired I went straight to sleep.

Thursday was test day. We received a lot of homework from Mr. G. Math class. He gave us about five pages. Then I took my reading midterm which was the easiest midterm I had all year. After school I had to study for my English midterm. I’m running for valedictorian so I have to remain a student/athlete.

Friday was a good day. I had my English midterm and I hope I did well. We had practice and with the playoffs coming up our coach made us run more than usual. I can’t wait for next Sunday because it’s the championship. But I guess I shouldn’t get to ahead of myself.

Saturday was the best day of the week. I had my normal breakfast club and another good workout. I was in the gym for three hours and wanted to stay another ten lol. After we left the gym I went home and took a nap before going to watch my future high school (St. Peters Prep) play Hudson Catholic in the County Championship. When we arrived it was hard to find a parking spot but we eventually found one. I thought we were late but the girl’s game was only at halftime. When I walked in I saw Halice Cooke and Josh Brown (shout out to them). Then I bumped into my boy Ewens Jean Baptise and we chilled out the rest of the night. It was a great game and SPP played tough but ended up losing by six. I was upset but now my goal is to win the title next year.

Sunday my brothers asked me to play them 2 versus 1. It was funny because Christian and I were having fun laughing while Joshua was playing very serious. Later we went to see Christian play his final 4th Grade game of the season (he’s only a 2nd grader). He had a solid game. See you guys next week. I’m Out Peace.
Posted by basketball spotlight at 9:14 AM