We have reached the halfway mark to the Road To The Grand Finale. Here's our 8th Grade report presented by Mr. Spotlight.

Team To Beat: Playaz Basketball Club
PBC has been a very hot team as of late. They won the programs first Spotlight banner and a few other tournaments. Now they must stay focused to gain that banner to take back to Paterson. But beware PBC teams are gunning for you now. 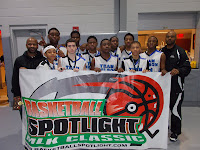 Surprise Team: Team Nelson
Team Nelson came to the MLK and took the event by storm. I was happy to this group back on the floor and made the opposition pay. Now as they enter the AC Showcase the competition will be a little stiffer so we will see how they respond.

POY Leading Candidate: Jamir Harris (Playaz)
Harris took the POY lead after dominating the circuit for the last two months. He led the Playaz to several championships including the Clash For The Cup crown. Now the big question is can he take them all the way to the Grand Finale championship. 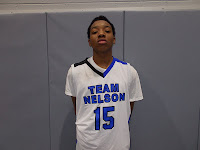 Surprise Player: LJ Stansberry (Team Nelson)
I had no idea who this kid was but he caught my attention quickly at the MLK Classic. His versatility stood out as he marched his team to the championship. He also has a calm and confident demeanor which might equate to a bright future on the floor.

Coach Of The Year Leading Candidate: Damon Wright (Playaz) Wright showed his prowess by taking a group of new players and turning them into winners. They currently lead the circuit in Grand Finale points and will be searching for the #1 seed in the final four.
Posted by basketball spotlight at 1:13 PM