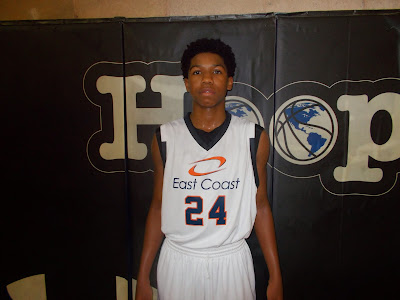 Tyus Battle is one of the most recruited players in high school basketball and no one knows this better than his little brother Khalif. The younger Battle has been living in the shadow of Tyus since he first stepped on the basketball court. But instead of sulking Khalif went into the gym and worked on his game and after watching him this weekend at the Hoop Group Fall Jam Fest he has improved immensely. Battle has a fluid handle, good size (6'2), sweet stroke and unique passing ability.

His father Gary Battle is known top trainer and one of the most successful AAU coaches in the country agrees with my assessment. “His best attributes are his high skill set, being able to score from all three levels and create his own shot off the dribble. His confidence is flowing right now and you can see it in his game” said Battle.

Coach Battle has been doing this for years and since he is the person that developed Kid Mamba he also knows that Khalif has some things to work on. “I see him having to improve his motor and playing the game at a faster pace. He also has to continue to work on his skills and get more actual time playing on the floor” Battle said.

After watching Khalif this past weekend I have to say that the comparisons to Tyus will increase has he makes his moves to the forefront of the basketball scene. Gary says he sees the similarities and differences between his two sons. "At his age Khalif is similar to Tyus in terms of skill set but appears to be a more natural scorer. Tyus had more talent and more game experience up to this stage. I think Khalif will make a move in the next few years and establish his own name” he finished.

Basketball Spotlight will continue to watch Khalif’s development and will be including him when our Class of 2019 rankings are updated.
Posted by basketball spotlight at 2:50 PM