One On One Feat: Mike Saunders (George Hill All Stars) 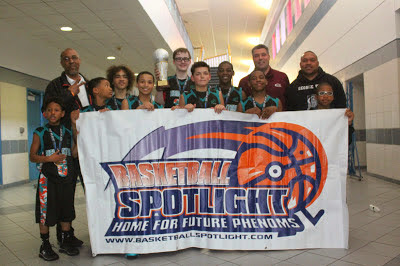 Last season the George Hill All Stars made their Basketball Spotlight debut at the AC Showcase. Their then 6th Grade squad made an impressive run through this stacked event and won the championship. We sat down with the George Hill skipper Mike Saunders and got his thoughts about a few subjects.

One On One Feat: Mike Saunders (George Hill All Stars)

BS: What’s new in the George Hill program this year?
MS: Working on finalizing a partnership with Indiana Elite/Adidas to maximize exposure for my kids once they move to high school. Adding a 2021 team called George Hill Elite-2021 (formally RBC), we got two kids 5'9 and two kids taller than 6 foot. Josh Davis is #1 2021 player in state and will challenge Zion for the #1 spot in country. Added a 5'10 kid named Max Sullivan to my 2022 team.

BS: You guys once again had an impressive run in the Class of 2020 and others, what do you attribute your success to?
MS: We put a lot of time in at the gym. We are real hands on. Kids get up lots of shots, ball handling, and learn lots of defensive concepts. A lot of are kids play up a grade or two before travel season starts. We have 3 coaches on high school staffs.

BS: Who are some of the top prospects that we need to look out for in your program?
MS: You guys and other websites have done a great job of covering alot of the kids in the program. I would say in terms of kids that might take people by surprise this year, Jason Morton(2020) is 6'6 now and two other 2020 kids new to the program last year Jamari London(6'0) and Sabastin Murillo(6'0) have been in the gym all summer, both will be dunking by March. I think Brevin Jefferson will have an unbelievable season now that he is healthy. Hunter Jackson has been working out with the high school team so he is going to surprise people with his strength.. Michael has been working on his strength and explosiveness and Kenny Tracy has grown another two inches. In 2019 David Bell and Isaiah Moore should have very strong seasons

BS: Who are some of the top 7th grade teams in the country you look forward to playing against and why?
MS: Oakland Soldiers (because they National Champs) WACG and Wisconsin United (Lots of mutual respect always exciting games). We see these preseason rankings and articles, it’s like people forget about us because we lost to Wisconsin and Florida in nationals, but yet we beat Izod and the Gauchos by 20 last season. Plus we beat St. Louis, Minneapolis FAB and Worldwide. I know Worldwide added lots of pieces, but just don't write us off quite yet.

BS: Tell us something about the George Hill program that we don’t know.
MS: 85% of kids in private school 90% on Honor roll. EDUCATION FIRST!!!!

BS: You guys won the AC Showcase last year, how was the experience playing in your first Basketball Spotlight event?
MS: The #1 tournament that we played in last year! Great competition, location was great and kids enjoyed activities off the court. For us to be able to play against Izod, Glory, Gauchos, and Takeover in one weekend was worth the trip. That doesn't include the fact that WACG was also there. We look forward to coming back with more teams.

BS: What are some of the aspects of AAU basketball that you like and others that you dislike?
MS: I like the relationships that the kids make. I dislike the rule bending in AAU. It’s getting out of control. I believe it does kids an injustice especially once they start playing in NCAA Certified Events and high school.

Posted by basketball spotlight at 9:01 AM