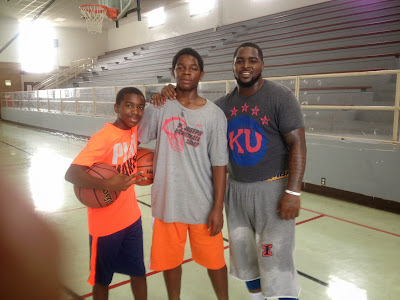 Marquise In Between Is Little Brother And Sheron Collins

Monday, I woke up and ate some breakfast and got ready and went to school. I got all my homework done and turned it in to all my classes. My CSI class was very fun. We have to find out who was the murderer and how did they do it. That class is really expanding my wisdom. After school I went to the high school and my coach pulled me in the office before practice. I had gotten my first letter from a college. It was LSU. I didn’t know much about them but my dad said Shaq went there and this cold guard he liked named Chris Jackson. I was excited to receive the letter it had a bunch of questions for me to answer. We had practice afterwards and we had a good workout as a team but I was off, I dont know what it was but I was off. Then I went home took a shower, did my homework and went straight to bed.

The next day I got ready to go to school and I was just thinking a lot of why I was off yesterday. I have been down lately because the people that have passed around me. And just thinking of everyone like my both of my great-grandmothers, my uncle Damion, and lastly my cousin Poon. I missed them a lot and I was frustrated about it and it affected how I was playing. I went to school and got all my work done. We had practice after school and it was the same as yesterday and after that I knew it was going to be a long week. Then I got home and went to bed. On

Wednesday I woke up with the same feeling as the other two days of my week. I got ready and went to school. After school we had practice again and I was even worse. I was just so down and disappointed. The feeling was terrible and I hope no one has to go through it. My teammates were asking me what was wrong but I had no response. So afterwards I went home and took my shower and fell asleep.

On Thursday I had an even worse day. School was fine but me in general was just so off. I can’t even explain the feeling. So in practice I had an ok session but I still was down and off. Afterwards I did a lot of homework including math and science. Then I fell asleep.

On Friday I woke up and took my shower and was still a little worried about the situation because that made me even mad on the court and less patient. So I went to school and after school I had a bad practice again. This was not my week at all. Afterwards Coach Breeze asked me what’s wrong with me and why am I so moody. I answered I have no confidence and I’m not focused. I got to talk to my father and he told me to be confident because if you don’t have confidence you don’t have anything. He said that I have to patient and seeing that my dad would take to time and help me boosted my confidence quickly. Then later that night I played 2k all day and fell asleep on the phone.

The next day I thanked God for another day and I ate some breakfast and I got on the phone until we left. Then I headed to practice. Today I had A Fantastic practice. I did really well in the half court set and I played really hard and everyone saw the difference between Sunday and all of last week. My dad really helped my confidence. Then I went home, ate some food and spoke to my mother until I fell asleep. Then I woke up did my diary and then I talked to my dad and (Shoutout to my dad and Mother because they are in Hawaii I hope they turn up!) after that I talked to my boy Tyger Campbell, we were talking about how are season is going to go. Then I fell asleep.

See you next week.

Marquise Walker
Posted by basketball spotlight at 11:14 AM