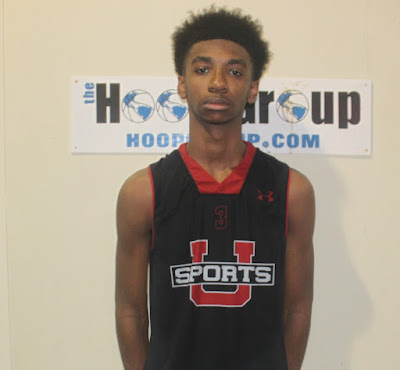 The Basketball Spotlight Atlantic City Showcase 7th Grade Division gave us a look at some of the top regional players in the Class of 2021. Here’s our first look at the top performers.

Trey Patterson Forward (Team IZOD)- During the weekend and especially in the championship game Patterson showed why he’s considered the top player in the nation. The 6’7 forward handled the rock like a point guard and also showed he could make decisions. On the scoring tip he used his size to get his mid-range shot off any time he wanted and also showed range on his jumper. He finished the championship game with a team high 23 points. When he’s grooving like this he separates himself from the rest of his peers. 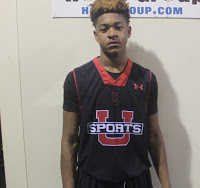 Jayden Brown Guard (Team IZOD)- Brown came to play when the game mattered the most. His ability to score on all three levels was on full display. I like how he maneuvers within the offense and picks his spot to score. He’s gets it done play either guard position but will likely reside as a point guard in the future. He tallied 16 points against NY Dragons in the semifinals and another 14 markers in the championship victory over the Rens.

Shane Dezonie Guard (Team IZOD)- Dezonie’s stock continues to rise each event he plays in. He was very explosive especially in the open floor. He’s beginning to make more plays involving teammates off the dribble. He’s one of the best two- way players in the country and seems to be only getting better. As he continues to stretch out in size his ceiling will also get higher. He averaged 13 points a game and lived at the charity stripe.

Tristan Jeffries Guard (Team IZOD)- Jeffries once again showed he does whatever needed for the team to get the win. Sports U didn’t need him to fill up the scoring column this weekend so he did the other things like defend, hit the glass and run the floor. Like Dezonie, he doesn’t mind guarding the opposing team’s top player. 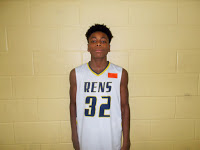 TJ Morris Guard (NY Rens)- I just love watching this kid play and can see him having a tremendous future. He’s hard to guard because he can score it from everywhere and hasn’t even touched the surface on his athleticism. His versatility was evident against the other Rens squad in the semifinals when he dropped 20 points including 3 treys and 6 free throws.

Sterling Jones Guard (NY Rens)- Jones was a consistent contributor all weekend. He tallied 12 points in their semifinal victory against Rens (Harris). In the finals he started out hot against Team IZOD by nailing a couple of treys in the first half. He showed a lot of fight.

Brent Bland Guard (NY Rens)- Bland found the hot hand in the semifinals by nailing four treys. His ability to stretch the defense allows the lane to open and penetration opportunities for this NY Squad. I can’t wait to get another look at him during the MDC.
Posted by basketball spotlight at 8:44 AM