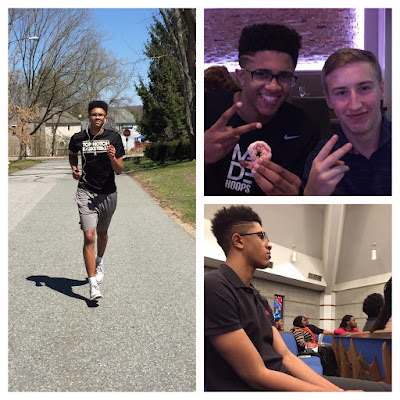 Trey Hall signing back in for Week 2 of my basketball diary. I hope all of you had a productive and blessed week since my last entry. I want to take the time in this entry to highlight one of the major themes in my life and the lives of most student-athletes: time management. Even though I had this past week off from school for April vacation, I was probably busier than I am when school is in session. Each day I had an agenda to accomplish, and it took good time management skills to make sure those things got done. In between my daily tasks, I wanted to make sure I took the week to focus on conditioning each day. It's definitely important to stay in the gym and get through drills and put shots up, but it's just as important to make sure you're conditioned well to have stamina in games.


Monday I didn't have much time to sleep in because I had appointments that had been scheduled for me. I got up, went outside for a 3 mile run, and then got ready for my 6 month dental cleaning. After my appointment, I had a chance to visit with some family members in Willimantic, CT where I spent the first 11 years of my life. We spent time looking through old pictures, telling stories, and laughing, which are always good times. I won't post any throwbacks lol, but it reminded me of just how far I've come in such a short time. Once I was done hanging with family I headed to my church for choir practice, an activity I’m committed to every Monday evening. Choir is another way I stay connected to God, my church family, and the friends I have made since joining the choir last year. We practiced our songs, learned a few new ones, and then sat around and talked for a while before leaving. The NBA playoffs were on when I got home, so I spent the rest of my night relaxing while watching the games until I fell asleep.

Tuesday was another early wakeup call because of a scheduled doctor's appointment. I had some house chores to get done before I could go anywhere, so I took the time to get caught up on those. After my appointment, I came home and went on another long run around my neighborhood. After my run, I took the afternoon to get ahead on some school reading.... I'll be thankful for that when classes resume next week! Later that evening, a few of my friends were going to a carnival so I met up with them for a couple hours. We spent time walking around, getting on a few rides, and overall having a good time.

Wednesday started off a little slower than Monday and Tuesday, which meant I could sneak in a couple of extra hours of sleep. Once I got up, I went for my run before helping with house chores, which took up a majority of the early afternoon. The minute all of this was done, I was able to get in a few hours of basketball drills and shooting from all three levels: inside, mid-range, and three-point range. As I continue to develop my game, it's important to me to stay versatile and be able to play multiple positions on the floor. The college and NBA players I look up to all have the ability to create mismatches, so I'm working on being a threat wherever I am on the court. Once I finished my workout, I had to get ready for my very first job interview. I recently became certified as a lifeguard, so I filled out a number of applications and had an interview for a summer position. I felt confident in myself heading into the interview and I feel like I did really well. I'll soon find out if I was offered the job; I'll continue to pray on this and see what happens.....cross your fingers for me! Right after the interview, I went to youth bible study at my church. Having an understanding of scripture and how it relates to life helps me remain focused and grounded. As soon as I got home I ate dinner and went to bed. I was definitely tired.

Thursday was another day getting ahead in schoolwork. I went for a shorter run than usual, but tried to run it at a faster pace to change the intensity. Mixing in hills and having different routes can make running kind of relaxing and fun. The more I do run, I notice how I'm able to compete for longer stretches of my games without needing a break. That evening I got back into the gym for drills and pickup games with a few of my Lightning teammates who are also from Connecticut. My boys Amir "Primo" Spears and Quron Zene Jr. are working just as hard as I am to be great!

With such a busy week, I was glad to take Friday as a day off from basketball, chores, and activities. I got to visit with my family again, which was both fun and relaxing. From there I went to dinner with a former teammate of mine who I hadn’t been able to catch up with since last year. We went to a seafood restaurant where I was able to try cooked swordfish, raw mussels and clams for the first time. Each new item was much better than I thought they'd be, but I had to spit the raw clams out; that one just wasn’t for me. We had fun catching up on old times and discussing everything we've been up to lately such as school, basketball, and life. After dinner it was right to bed for me since I had to be up early Saturday morning for tournament games in Providence, Rhode Island.

Saturday was an early morning in order to make the drive from home to Providence, which takes about 75 minutes. This weekend I played up in age group with our Lightning 15U team as they were playing in the 16U division.....that's two weight classes up for me. I still felt mentally and physically ready to compete since I'm used to playing pick-up games with older players back home. We won our first two games Saturday but lost Sunday in the semifinals. I thought I competed and shot the ball pretty well, but there is always room for improvement. I don’t think anyone gets better at anything they do if they don't always see room for improvement.

So as Sunday comes to an end, I'm getting myself ready to get back into my weekly school routine. In between homework and church, I'll also be spending extra time in the gym getting ready for the Under Armour Next combine in DC this upcoming weekend. As always, stay tuned for my next entry when I’ll update you all on the event and my week leading up to it.

Signing off until next week! Stay blessed…