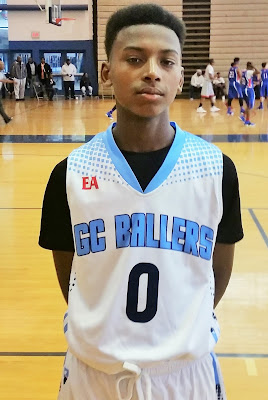 Jaden Bradley Guard (EACG Ballers) – Bradley was hands down the best player in the 6th grade division. His feel for the game, basketball IQ, and court vision were next level and he already understands how to get his teammates involved or when he needs to take over the game. He has great size for the PG position and he does something that very few players at any level do and that is throwing the “Lead Pass”. These lead passes account for many easy buckets for his team. He is also one of few players that could record a triple double at the middle school level. Jaden’s complete body of work potentially has him vying for the #1 player is the class. He reminded me of a baby Penny Hardaway, therefore say hello to Jaden “LIL Penny" Bradley. 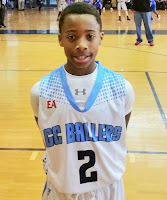 Jordan Marsh Guard (EACG Ballers) – Marsh is Bradley’s running mate and although he is small in stature he is a fierce competitor. This lefty knows how to score the ball. He loves attacking the basket and he also can knock down the jumper. Jordan shoots a high percentage from the free throw line and he seems to always be out in transition finishing off of one of Bradley’s lead passes.

Shane Fernald Forward (EACG Ballers) – Shane is one of the many big forwards that contributes for this squad. He is very active on defense grabbing rebounds and clogging the lane making it difficult for opposing offenses. Fernald has a nice stroke from the mid-range and finishes at a high percentage around the basket.

Paris Gattis Forward (EACG Ballers) – Paris is another tall forward that can play either at the high or low post. He has good hands and can score in the painted area. Gattis can guard either of the frontcourt positions and helps the team control the boards where they rarely lose the rebounding battle.

Harrison Alexander Forward (EACG Ballers) – Harrison is also part of the Ballers huge front line. He plays hard on both ends of the floor and helps his team control the backboards. Alexander gets his scoring opportunities from rebound put backs and drop off passes from his elite guards.

Francisco Mattei Forward (Courtmasters Elite) – Different team same result. Mattei has been a fixture on the Riverside Hawks and they seemed to always end up in the championship. This weekend running for his new team Mattei led them to the chip where they fell short to last year #2 team in the country. Francisco is a strong bodied forward that can do a little bit of everything. He is very unselfish and makes the right play. Right now he is at his best when he is mixing it up inside finishing around the basket and he is pretty much unstoppable in transition.

Jaquan Sanders Forward (Courtmasters Elite) – Sanders is a mini Draymond Green. He plays a lot of Point Forward for his team. He has a high IQ and can get the defensive rebound and push the rock. With a good handle he can create his own shot or drop a dime to one of his teammates. Jaquan has a pretty stoke from 3 point land as we saw him knock down numerous threes throughout the weekend.

Lacey Howard Forward (Courtmasters Elite) – Howard is a long athletic forward that is all over the place on the court. He can guard 4 positions on defense which shows his versatility and he has a really high motor. When watching he seemed to always be around the ball either grabbing a crucial rebound, getting a put back basket or finishing in transition.
Posted by basketball spotlight at 11:12 AM