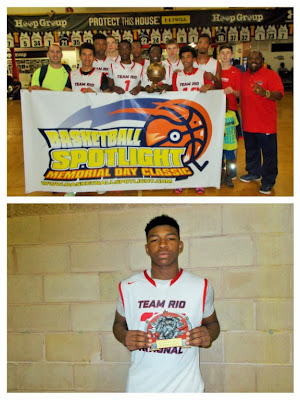 Team Rio National capped off a dominating weekend by defeating Metro Celtics 51-42 to win the Basketball Spotlight MDC 8th Grade Orange Division Championship. Team RIO defeated each opponent by at least double figures leading up to the championship game. Congratulations to both teams making it to the finals.

Mr. Memorial Day: Tariq Ingraham (Team RIO National)
Ingraham was a straight beast on the blocks all weekend. He been scoring close to the basket with ease all season but at the MDC he was playing above the rim. Yes Tariq throw down a couple of dunks in traffic. He’s making a strong case as one of the top interior post players in America.

CLICK HERE IF YOU HAVE GAME
Posted by basketball spotlight at 10:06 AM