One On One Feat. Kennedy Chandler (Team IZOD) 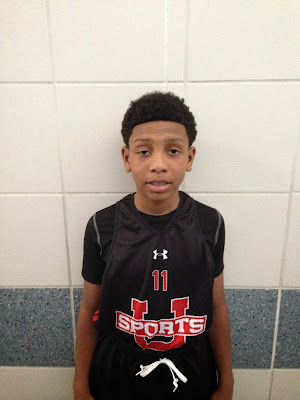 Kennedy Chandler has been a proven winner for years with Memphis War Eagles and We All Can Go All Stars. The floor general also was a major name around the country when it came to the camp circuit. This season he spiced things up when he traveled across the country to suit up with the loaded Team IZOD 6th Grade bunch. Basketball Spotlight had a chance to holler at Chandler and here’s what he had to say.

One On One Feat. Kennedy Chandler

BS: What prompt the move for you to come east and play with Team IZOD?
KC: I think it’s a great opportunity to play with Team Izod because it is great organization, and I always wanted to play for Coach Reggie. When i watched them beat WACG of couple of times when he coached the 8th grade, that really motivated me to want to play for him, because I like how he coaches his guards. Besides my dad coaching me with the Nightrydas Elite, playing with top kids around the country is great.

BS: What has been the fondest moment of your young AAU career?
KC: Meeting new kids (different players) getting to know the players not just on the court, but off the court. My dad have always taught me to build relationships with other coaches and players. And of course accomplishing the main goal, winning National Championships, tournaments, and approving my game by staying in the lab.

BS: Where do you think you rank against the other top guards in the country?
KC: I never really think about rankings right now, but I think I'm at least top 5 as far guards. But point guards, top of the list.

BS: How has the experience been playing for Team IZOD?
KC: The experience has been good, playing for a great organization, learning their system and getting to know the kids very well. We have won the Atlantic City Showcase and right now we are 8-1 in the NYBL.

BS: Who are some of the top players you have competed against?
KC: Zion Harmon, Jaden Springer, Seth Wilson, and Jaden Jones.

BS: Who would you consider as the #1 player in your class and why?
KC: It’s really hard to say, but I will say Zion Harmon right now, I've been competing against Zion since the 2nd grade and he pretty much has a complete game. But you have players like Donnell Harris, Trey Patterson, and myself trying to reach that point.

BS: What camps will you be attending this summer?
KC: Basketball Spotlight Future Phenom Camp, Adidas Phenom and many more.

BS: What are the strong assets in your game?
KC: Court vision, shoot the 3, mid-range, or floater. As a point guard, I make plays for other people, attack the lanes. But most important I play 94 feet, I play defense on the ball and off the ball. I take pride in my defense.

BS: What part of your game needs improvement?
KC: Getting stronger as far as my body. Right now I have a strength and conditioning coach that I worked with and it’s working out great, along with me also eating properly.

BS: Tell us something we don’t know about you?
KC: I'm very committed to the game and also working hard every day to improve my game, whether if it’s in the gym with my strength and conditioning coach, my skills and drills coach, or working out with my dad. I refuse to take the game I love lightly, very dedicated to the game.
Posted by basketball spotlight at 12:56 PM