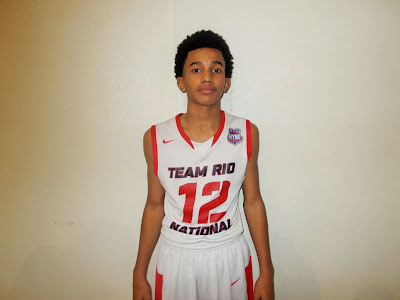 The Basketball Spotlight MDC 8th Grade Division gave us a look at some of the top talent in the region. We have a lot to get at in this report so let’s start off with some of the top floor generals that were on display in Neptune.

Jalen Gaffney (Team RIO National)
Gaffney is on course to claim his stack as the top floor general in the region. This weekend he showed the ability to operate the well-oiled Team Rio National machine. He delivered precise passes, broke down defenders and finished off plays himself. Finally he would also hurt you if you left him open and the rock rotated his way. 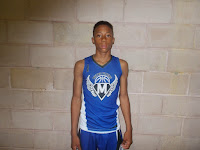 Josh Pierre Louis (Metro Celtics)
Pierre Louis has sprouted up some inches since the last time he played in a Spotlight event. He still has the quickness which he used to get into the lane and finish. He also hit a couple of big treys in their hard fought battle over We R 1. His improved size should help him be an instant impact on the high school level next year.

Zach Lazanic (Philly Triple Threat)
This point guard reminds me of Mike Nardi from Villanova. I like the way he turns the corner while hitting the gaps and delivering the rock to his teammates. He takes really good care of the rock and seems to make the right decisions. His insertion into this lineup helped this Philly squad head into the right direction. 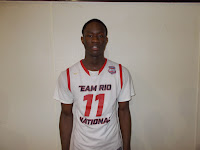 Amandu Sarnor (Team Rio National)
When Gaffney needed a breather Sarnor came right in and went to work. This is his first year playing the position and he has developed nicely. He uses his strength to hold off defenders trying to pick his pocket. This power also allows him to get into the lane and bully ball handlers on defense. He also showed some improved athleticism on a breakaway dunk.

Eligah Wynn (New Heights)
Wynn suited up with New Heights for the first time but still played with that Harlem Jets hunger. He got into the seams of the defense and made the defense react. On defense he was an absolute pest the entire 94 feet. He made sure Glenn Anderson and Adeleye Oyekanium ate well the entire weekend. 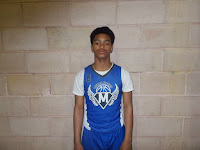 Jon Jon Wilson (Metro Celtics)
Wilson had his moments when he ran the team well and played good on the ball defense. He has some serious experience playing on this level and uses it well. He showed the ability to breakdown the defense and make good things happen. Eric Berschadsky (CMEK)
Eric played in the Blue Division but his game shows so much promise I had to mention him in this article. He’s capable of getting anywhere he wants on the floor and has good court vision and a mean ratchet if left open. He plays the game with an air of confidence. You will be seeing this name again on the NJ high school scene.
Posted by basketball spotlight at 10:33 AM