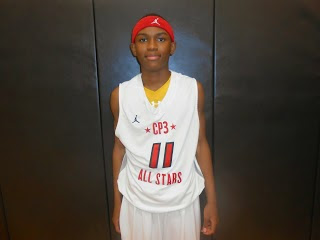 The 8th Grade Division of the AC Showcase featured some of the best talent in the country. Here’s Part 3 of our top performers from the weekend.

Kobe Langley Guard (CP3 All Stars)- After having a quiet first game versus Team Ennis, Kobe woke up like a lion against Team Rio and Team Takeover. The lefty stepped up by showing explosion and a skill set which included a pull up jumper. He has the ability to create space from defenders ad get wherever he wants on the floor. He tallied 11 points versus Team Rio and 13 markers in their narrow victory over Team Takeover. 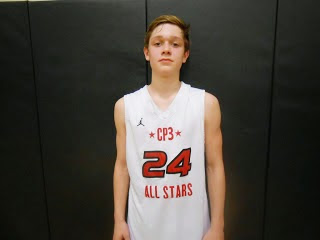 Mike Green Guard (CP3 All Stars)- The sharp shooter had his best outing in their showdown with Team RIO. In the second half of this tough battle Mike knocked down two trey balls while finishing with 10 points. He’s been known for years as a clutch performer and at this event it wasn’t any different. He also finished with 10 markers versus Team Ennis. 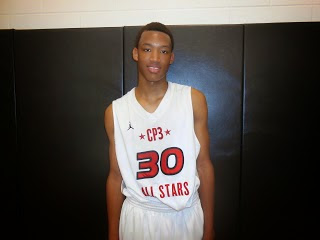 Wendell Moore Forward (CP3 All Stars)- Moore had a consistent weekend scoring 8 points a game which is a lot because of CP3 rack of talent and style of play. But against Team RIO when they wanted to make a run for the victory they placed him on the blocks and let him eat. The versatile forward delivered as usual.

Chris Hinton Forward (CP3 All Stars)- The strong forward gives the national champs more depth and another consistent rebounder. He hammered the glass hard and established post position especially against Team Ennis. His wide and strong frame gives him a strength advantage over many defenders on this level.

Max Farthing Forward (CP3 All Stars)- I like Farthing size and his ability to step out and hit the face up jumper. He draws the big forward from the opposing squad out of the paint which opens up the driving lanes for the guards. He also can step back past the three point line to shoot.

Jaden Campbell Guard (Team Ennis)- This wing guard scored at will against some of the top teams in the country. He displayed the ability to score from all the levels and finish off tough plays in the paint. He nailed five treys on his way to 19 points versus Team RIO and two treys while scoring 17 points against CP3 All Stars. This could have been his coming out party.

Avan Nava Guard (Team Ennis)- Nava was one of the best catch and shot guys in the building. Just ask Team Takeover how he drilled them for 18 markers. He had no fear going up against some of the best defenders in the USA. He also finished with 11 points versus Team Rio National. This kid can stroke it.

Noah Wharton Guard (Team Ennis)- Wharton ran the show for the Canada team over the weekend. His slick handle helped their dribble drive game and open up gaps for teammates. His big scoring game came against Team Takeover finished with 18 points in which 9 of them came from the charity stripe. Which means they had a tough time keeping him out the lane.

CLICK HERE IF YOU HAVE GAME!
Posted by basketball spotlight at 5:58 AM