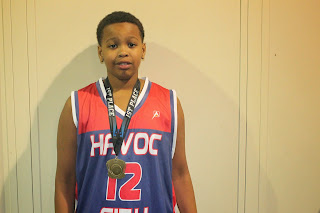 Antonio Sellers Guard (Havoc City)- One of the new trends in showcase tournament is teams bringing top talent for the weekend. Havoc City did just that by having the #1 player in the country drive down I-95 for the Tip Off Classic. Yes Antonio Sellers AKA Baby Briscoe was in the building. Sellers didn’t waste any time getting adapted and eventually did his thing. In the finals he led all scorers with 20 points. When he’s on his game, his combination of size and skill makes him difficult to stop on this level.

Knasir McDaniel Guard (Havoc City)- Sellers benefited from playing with one of the most unselfish players in the country in McDaniel. This point guard had to be on this earth in a previous life because the way he sees the floor is so old school. He has one of the best drive, draw and dish games in the country if not the best. If I’m starting a team from scratch for this age group I would have to consider selecting him with my first pick.

Ferrell Crowell Guard (Havoc City)- Crowell was another big contributor over the weekend. The combo guard played well alongside McDaniel and relished in the open floor. When you have him charging at you in full speed it’s difficult for any 5th Grader to contain this kid. He chipped in 12 points in the finals.

Obinna Chuke Guard (Havoc City)- While the trio up top made the defense collapse, Chuke made them pay with the deep ball. He knocked down 4 treys on his way to 18 points in their championship victory. He found the right time to shoot lights out.

Kameron Rodriquez Guard (Riverside Hawks)- It was his half court buzzer beater that launched Riverside Hawks into the finals. This kid loves the big moment and tends to deliver when it comes. His team came up short in the finals but once again he made it to the big dance.

Michael Carothers Guard (Riverside Hawks)- Carothers stepped up big in the championship. He scored 13 points including 3 treys in the finals. He teamed up well with Rodriquez and they almost got the job done.

Isa Khalid Guard (Riverside Hawks)- Khalid was another deep threat for the Riverside Hawks. He chipped in 10 points in the loss while also connecting on two trey balls.
Posted by basketball spotlight at 8:03 AM