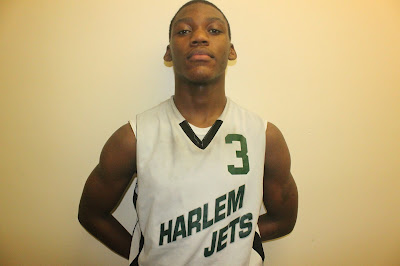 The Basketball Spotlight Tip Off Classic 8th Grade Division produced a first time champion. It also gave us a chance to take a look at some new faces on the basketball scene. Here’s Part 1 of our top performers from the weekend.

Elijah Wenn Guard (Harlem Jets)- Wenn was the team’s catalyst all weekend especially in the backcourt. He used his thick frame to break through the defense and finish after contact. On the defensive end he bullied ball handlers and caused several turnovers. He has the poise and passion to help his team take home the title.

Adeleye OyeKanimi Forward (Harlem Jets) Adeleye went crazy in the finals. The athletic forward his strong finishing around the basket but even stepped out and showed us some of his three point prowess. He’s a true energy player on defense; grabbing boards and blocking shots.

Glenn Anderson Guard (Harlem Jets)- Anderson came to life in the finals. He was a demon in the transition game. Pushing the rock up the floor and making good decisions with the pill. On defense he’s another quick, pesky guard harassing ball handlers. He teamed well with Wenn in the backcourt.

Amadau Traore Forward (Harlem Jets)- The big forward is still developing on the offensive end but on defense he remains and problem with his rebounding and shot blocking ability. His presence allowed the HJ guards to gamble in the passing lanes and trap a little more.

Khalif Battle Guard (New Heights)- Battle showed a lot of promise weekend. His smooth stroke from the perimeter looks pretty especially when it’s dropping. I also was impressed with his ball handling and play making ability in the open floor. He’s capable of breaking down most defenders and sees the floor very well. Yes, another Battle is o the horizon.

Ryan Myers Guard (New Heights)- Myers was serviceable this weekend. He’s strong with the ball and can score when needed in that area. I see him trying to make the transition to the traditional point guard position which can be difficult but attainable with hard work.

Precious Achiuwa Forward (New Heights): Now this kid is an interesting prospect. Very long, wiry and athletic. I like how he finishes off plays and runs the floor like a gazelle. While some might want him to be a post-up guy, this kid seems to yearn to play with the ball in his hands. His coach will have to learn to deal with that ups and down of that experiment.

Alexander Rice Guard (New Heights)- I think with a little work and confidence Rice could be the point guard New Heights needs. For beginners it’s in his genes (Son Of King Rice) and he as a natural smoothness with the ball. All he needs now is to understand and know that it’s his team to run.
Posted by basketball spotlight at 8:43 AM