Basketball Spotlight Feature: From Utah To The Spotlight! 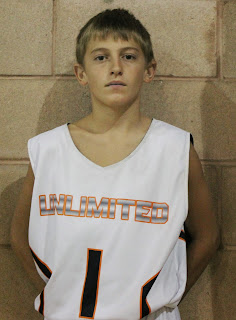 Evan Young is a player that simply loves to compete; you can’t help but fall in love with his passion to play the game and to compete on the highest level. An unassuming kid off the court he has plays with a high intensity motor and with a quite it confidence when stepping onto the floor. Earlier this month his without him, his Unlimited Glory squad competed against the Riverside Hawks losing by 44 points – with his arrival Glory suffered a tough 4-point defeat in the first round pool game and had a chance to win down the stretch. A 40-point turn around that Young was a major contributor to – after the emotional loss they came out flat in the next game versus the Mavericks suffering a very surprising 1-pont defeat.

Evan finished the event on a high note taking home a victory in the 3rd game - On the court, he's a fearless shot taker and big time shot maker who wants to get to press the paint and will take a licking and keep on ticking. When fouled he is a high percentage shooter who will knock it down from the line with great efficiency.

The #14 player in the class in the country made his first appearance here at the Spotlight and he didn’t disappoint; he proved he had the goods, talent, and skill set to compete against the best in the country – he’s not just a gamer he’s a game changer.
Posted by basketball spotlight at 8:08 AM