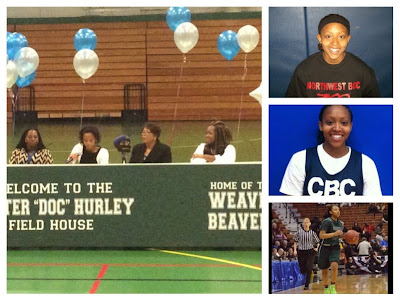 Basketball Spotlight has long been the home for the Future Phenoms when it came to boys’ basketball. But we also had a girl who broke through our circuit and caused havoc. Her name is Dejane “Snoop” James. James starred with CT 300 and CBC during her early years hooping. Now the Weaver High School player has just signed a letter a Letter of Intent to Hampton University in Virginia. James was not only able to hold her own but outshine a lot of the boys competing at the time. Despite protest by several coaches Basketball Spotlight found no wrong in letting the young lady get busy. After leaving the Spotlight circuit and playing AAU basketball and high school ball for Capital Prep and Weaver High School.

James relishes her moments at the Spotlight circuit, “Spotlight was my first time playing at an elite level. Playing against players like Tyus Battle and Jamir Harris made me and Shaquana realized that we could be special. I think I became a D1 player at Spotlight. Even though we lost, every time I came back I got love from players and parents were all happy to see a girl play against elite boys” she finished.

Posted by basketball spotlight at 6:37 PM