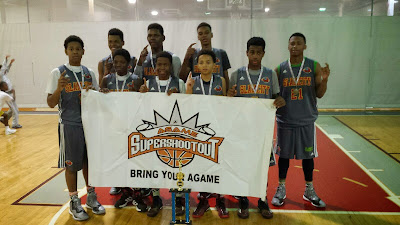 On Friday morning things looked bleak for Slam City Elite after a few departures. But it seemed like the Maryland bunch used this as motivation as they won the A Game Super Shootout 54-43 over Team Takeover in the 7th Grade Championship. The “Terror Squad” showed resilience as they came from behind in each game they played.

Coach Francis was ecstatic with his team’s effort over the weekend. “We are tremendously happy as a team this Monday morning; and frankly I couldn’t be any prouder of how the kids responded to the level competition and the adversity of the game on and off the court leading up to and throughout the weekend. What many have failed to realize across the country to date is that this band of brothers aren't playing for titles or trophies, they are not playing for press clippings. They already have that and have achieved on the biggest stages out there and that’s why there are numbers next to each of their names already. Discussions have already begun to take place at the collegian level for this group of players proving that from an opportunity standpoint the whole is greater than the sum of its parts and the parts are pretty damn good! This team plays for the name on the front of the jerseys not the names on the back. This is why we have won to this point and why we will continue to compete on a high level. Our continued team success guarantees future individual success and anyone that truly knows and understands how this game works knows that this is truly what winning is - ensuring kid’s college educations are paid for, period” said Francis.

You can catch Slam City AKA “Terror Squad” at the Basketball Spotlight Tip Off Classic in Neptune, NJ. December 6th and 7th. Stay tuned as we bring you more feedback from the A Game Super Shootout.
Posted by basketball spotlight at 3:49 PM