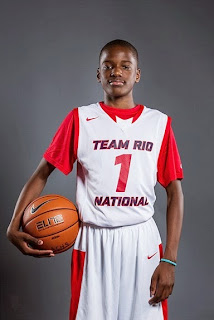 In April Basketball Spotlight will be updating our rankings and one player that’s sure to make a raise is Bryan Antoine from Team Rio National. Antoine has been progressing and is currently ranked #19 in the country. We took a look at him this weekend and were extremely impressed with his skill set, explosiveness, shooting and ability to play on the defensive end. After scanning through our rankings it could be safe to say that Bryan might be the best guard in America.

Team RIO National’s director Brian Klatsky has been coaching Antoine since 5th grade with the CJ Hawks and has seen his development first hand. “First, he has all the natural tools. Second, he has trained relentlessly with I’m Possible training and lastly when Scottie Lewis came to town he really pushed Bryan to get better. He’s a super kid not only on the floor but also in the classroom. He will be very excited to join Scottie Lewis and Alex Klatsky at Ranney School next year in high school” he finished.

Basketball Spotlight will keep you posted on Antoine’s progress over this season. Stay tuned as we bring you more top players that will be performing on the Spotlight circuit this season.


2014 Basketball - Bryan Antoine Highlights from Next Play Productions on Vimeo.
Posted by basketball spotlight at 9:15 AM