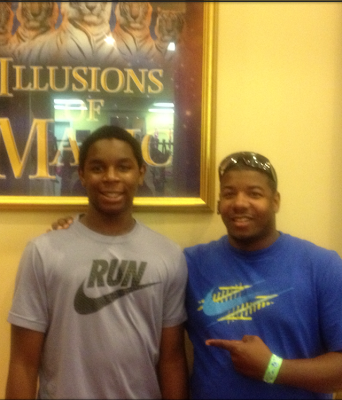 Wassup it's Marquise Walker with my weekly.

On Monday I woke up and got ready for school. It was really fun. It was Red Ribbon Week. So on Monday we got to wear our pajamas. I was really quiet in my classes. My day was really slow and we barely really did anything in class. After school we had practice and I did really well. We went over a lot of defenses. We ran a little bit also it wasn’t hard but it was good enough for a whole practice because we did a lot of live situations. Then we worked on some offensive sets. We are progressing in what we are doing in our offensive sets. Afterwards I went home and took a shower then played some 2k15 then went to sleep.

The next day I woke up really sleepy because of that workout from yesterday. I got ready and headed to school. Today it was ATHLETES VERSUS NERDS so you had to dress as a nerd or an athlete. Of course I chose the nerd. I am a student athlete not just an athlete so why not be a nerd. Surprisingly it was more nerds than athletes whom I thought was really good for me. We got called into the middle of our school for pictures. After school I went to practice it was really hard-working today. We did some defensive things then some individual skill drills. Then we did some full court workouts and I was scoring very well. Afterwards we did some running again. I went home then ate some food and fell asleep.

The next day I woke up and got ready and went to school. Today we had all red day, so you would wear how much red as you can. After school I went to practice was really good, we did more offense today than defense. We played a lot of up and down and we did some rebound drills. Then I went home and got on my phone took my shower and fell asleep.

On Thursday I woke up and went to school it was camouflage day. I didn’t have any camouflage clothes so I just put on some regular clothes. It was fun though. We finished some of our school work and everything. After school I went to practice and we worked on some more offence. We barely worked on defense. We had a lot fun and I threw a lot of good passes. I really enjoyed practice. Then I went home took my shower, ate and played some 2k. Later, I went to the football game which was fun before going home and getting some sleep.

On Friday I woke up and got ready for school and everyone had on their costume. Some was funny and some were scary while others were just plain crazy or silly. I came to school dressed regular. After school it was no practice so I got a ride back home and I played the game and went with my family to trick or treat. Then afterwards I went home and played some more 2k and fell asleep.

The next day I woke up and ate some breakfast, did some laundry and fell back asleep after watching my favorite movie ATL. Then I played 2k until 11:00 and then I watched the new Drumline. Then I fell asleep.

On Sunday I woke up and got some more sleep after eating breakfast. I played a little 2k and then I went to practice. We did a lot of work and a lot of defense and I got my team shoes. When I got home I did my push-ups and sit ups before finishing my diary and falling asleep............zzzz
Posted by basketball spotlight at 11:23 AM