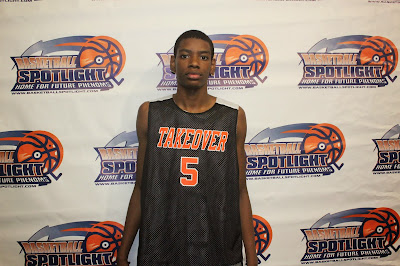 The Basketball Spotlight Clash For The Cup 8th Grade Division brought together the best talent on the East Coast. Here’s part 2 of our top performers from Neptune, NJ.

Brandon Slater Forward (Team Takeover)- Last season’s Most Outstanding Player has grown a few inches and it has definitely impacted his game. This weekend he ran the floor like a gazelle and flew like an eagle. Brandon has a few dunks but also showed the range on his jumper that he is known for. The scary part is he’s still nowhere near a finished product. I know I will be reading about him for years to come.

Myles Dread Forward (Team Takeover)- Some might be bigger or faster but there’s no many smarter on the floor. Dread knows how to use his basketball IQ and positioning to get the job done. I like his midrange pull up and ability to score over shot blockers. He also brings an unselfish style including a willingness to make the extra pass.

Justin Moore Guard (Team Takeover)- The 7th Grader plays a shooter's role for this squad. He looked his best when he drifts to the corner and knocks down the trey ball. He shoots it with confidence and has the size to get it off over closing defenders. The players in his class will have their hands full when he decides to play against them.

Jalen Carey Guard (Rens)- Rens made a final four run and Carey carried much of the scoring load. He has a soft touch and scoring mentality to match. He’s very crafty with the rock and understands that a change of pace is crucial when creating space. Saturday he had a field as he scorched Team Final and Team Twelve. He was in a zone for a moment.

Zedrek Ferrell Guard (Rens)- I like the way this kid controls the tempo of the game. He’s been in a lot of big games as a lad so the atmosphere didn’t effect in at all. When the game was on the line against Team Final, Ferrell came up with one of the biggest shots of the tournament. It sent TF home for good.

Aaron Clarke Guard (Team Scan)- Clarke made his debut running the point and held his own against some of the best competition around. He logged long minutes while handling the point and had to also pick up the scoring load. His transition to the point will be a work in progress but I think his basketball IQ will get him to the finish line faster than most people think.

Walter Talley Forward (Team Scan)- Talley saved Scan from an early exit by carrying them over the Playaz in pool play. Talley received the rock near the free throw area and took advantage of the Playaz depleted front line. Once he got on a roll it seemed like everything he shot up went in. He finished through contact and showed good touch when converting.

Max Lorca Forward (Team Scan)- Lorca is very long and has a shot blocking presence even though he doesn’t enjoy the physical nature just of yet. He can finish put backs and shot the face up jumper. Down the road he should be a good catch for Scan.

Isiah Mucius Guard (Team Scan)- Another potential good catch should be Mucius. He has the frame for the game but hasn’t put all the skills together as of yet. He’s a wiry wing about 6’3 and should stretch out to be about 6’7. Once the finished product is done things could be scary with this kid.

Charles Pride Guard (Gym Rats)- Pride led the way for the pesky Syracuse squad. The slashing wing guard scores in bunches especially when he has the 3 ball working. He filled up the scorebook especially in their quarterfinal loss to the Rens. He did well in his Spotlight tournament debut.

Alex Gray Forward (Gym Rats)- Gray does all the dirty work for the Syracuse squad. He hit the glass, clogged the lane and keeps all the loose balls alive. He also has good touch in the paint and will drop in a floater over top of a shot blocker.

Mika Adams-Woods Guard (Gym Rats)- Adams-Woods also translated his Skillcase success to the Clash. In the open floor he’s difficult to slow down because his quickness combined with his change of direction puzzles defenders. When it’s time for him to finish off the play he uses his body to shield shot blockers which results a bucket or trip to the charity stripe.

Will Engelhart Forward (Gym Rats)- Engelhart was one of the purest shooters in the gym. When the defense concentrated on Mika and Charles, Will made them pay when they were slow on rotation. Each shot he let go seem to have a chance of going in. So you know he was almost automatic from the charity stripe. A big surprise was his toughness and ability to rebound inside. He didn’t back down from some of the top players in the country.

Stay Tuned As We Bring You More Coverage From The Clash!

Posted by basketball spotlight at 12:43 PM