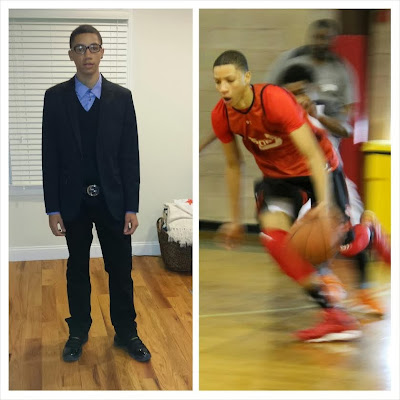 What’s up this is Atiba Taylor Jr. reporting back with my FINAL Diary Of A Baller entry.

Monday there was no school again due to another snowstorm. I mean at this point all this snow is just ridiculous; I’d rather just go to school…LOL. I was supposed to have a basketball workout that night but it was canceled because of the weather, so instead I was outside shoveling snow; which I hate. Once I was done, I worked out in the house and got myself ready for school.

Tuesday was a regular day at school, nothing special just work. After school I was suppose to have another basketball workout later that night but it never happened. We drove all the way to Jersey City to find out some guys had rented the gym for the evening so we couldn’t use it, so I ended up working out back at my house.

Wednesday after school my Dad and I went to my gym to put up shots. After struggling with my shot and free throws last tournament, that’s all we worked on. I put up 150 free throws but only made 103. Then I shot 300 game time shots but made only 172. I’m sure people think it’s easy to make a certain amount of made shots but it’s not. Adjusting your shot takes time and a lot of practice; good results definitely don’t come easy

Thursday was another snow day so basically I did the same thing I did Monday, a whole bunch of nothing LOL. My team was suppose to practice that night so we could get ready for the M.I.T. Tournament this weekend but our practice was canceled because of the snow once again. Seems like I can’t get any basketball work in because of all this snow so I just worked out in the house again.

Friday morning my school had a two-hour delay because of the snow so I didn’t have to be at school till 10am. We were supposed to leave for the M.I.T right after school but the tournament got moved to the following weekend due to the consistent snowfall. This obviously has been a terrible week for basketball LOL.

Saturday my team didn’t practice and since we’re not going to the M.I.T. this weekend because of the snow I was able to attend my friend Sweet 16 party that I was invited too. I went to the mall to get her a gift and then I was off to the party. The party was real cool. I finally got a chance to do something outside of basketball. For once, I was able to just chill and hang out with my friends.

Sunday…guess what?! My team had practice but it got canceled again because of the snow and ice…LOL. I really hate snow!!! Now this is crazy; a full week of no basketball and it is killing me. This is definitely not the way I wanted to finish off my basketball diary but Mother Nature had other plans I guess. I did watch The NBA All Star game though and that wasn’t even that fun to watch. Their uniforms were ugly and the game was kind of boring to me. Kyrie and Blake G. was the most exciting to watch but that’s about it. After the game I watched the movie 300 with my family then I went to bed.

I would like to thank Mike Melton and the BBSpotlight staff for giving me this platform to share my story with the world. I’ve been playing in Spotlight events since the 3rd grade I appreciate you guys for exposing my talent nationally, and always bringing the best talent to New Jersey to compete. Since I’ve been playing I won the Grand Finale Championship in the 4th grade with The NY Gauchos, 6th grade with KSK, 7th grade with Team Izod, and we will win The Grand Finale championship again this year too. BBallSpotlight is definitely one of the best nationally known tournaments to play in hands down. I also want to thank my basketball organization Team Izod Sports-U for allowing us to compete in Spotlight events and my teammates as well because without them I would have this opportunity. Soon I will be announcing where I will spend my next 4 years of high school at and Basketball Spotlight will be the first to announce it. Thank You Everybody!!!!!

P.S.A. WE ALL CAN GO ALL-STARS (WACG) STOP BEING SCARED AND COME TO THE BBALLSPOTLIGHT ATLANTIC CITY SHOWCASE!!!!! #COMEGETTHISWORK

Basketball Spotlight would like to thank Atiba Taylor Jr. and his family for letting us inside their lives the last 12 weeks. We wish him luck in high school and beyond. Our next stop we will travel to the Big Apple and check in on point guard Ja'Quaye James of the Playaz Basketball Club which should be interesting.
Posted by basketball spotlight at 2:33 PM