Clash For The Cup 8th Grade Division: Put Up Or Shut Up! 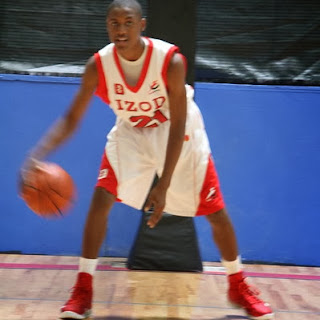 The 8th Grade Division of the Clash For The Cup is totally loaded. This will really give us a chance to see who really has the juice. Let’s take a look on who will be down in Neptune for the Clash.

Playaz: Quinerly has gone but the Playaz still remain dangerous. Justin Winston and Ja’quaye James give them a suitable tandem. They will be trying to collect their second banner of the season. The pressure will be on for the Paterson crew.

Team IZOD: The “Supreme Team” is back and fully loaded. They will be looked at as the team to beat and everyone will be biting at their heels. Luther Muhammad, Atiba Taylor, Nazi Reid, Jahvon Quinerly and Tyrek Chambers headline this bunch.

Team Final: “The Prince” Cameron Reddish showed true flashes at the Tip Off Classic. Now he should be ready to lead Team Final back to the final four at least. They have a strong squad and capable of running the table.

Team Takeover: TT has been consistent this year but hasn’t won that Spotlight banner for a couple of years. Point guard Donovan Toatley, Myles Dread and Brandon Slater leads this bunch into battle. Something tells me they might win it all this time around.

Team Scan: Scan will need to show they belong among the elite at the Clash. They didn’t have a great showing at the Tip Off Classic but I believe Coach Munch and Aaron Clarke will have the red/black ready. The microscope will definitely be on this bunch.

Rens: Nayshon Hamlet always brings his hard hat and Jalen Carey is smooth on the wing. Therefore Rens has a fighting chance of bringing home the title. They are one of the toughest teams in the region and will be ready for war.

Gym Rats (Syracuse): The tandem of Mika Adams-Woods and Charles pride proved themselves worthy at the Super Skillcase. Now they must show they are ready for the heat of the Spotlight. They open up against the #2 team in the country. The time is now!

6th Man Warriors: This Maryland crew always brings a respectable squad. I heard they made a little noise in a few tournaments in their area. Now it’s time for the big stage. Coach Mouton has championship pedigree hopefully it can rub off on his squad.

Mass Shooting Stars: Devandre Edmonds, Paul Durkee and newcomer Chris Doherty gives this Massachusetts bunch a formidable trio. They haven’t held a banner in a while maybe this could be their weekend.

Team DEMI: The other team from Massachusetts missed out on the Tip Off Classic so the Clash will be their season debut. Dynamic backcourt of Shandon Brown and Maurice Works will be called on to do damage.

Team Rio National: It will be interesting to see how Team RIO National responds to the 8th Grade Blue Division. In the Tip Off Classic they were only challenged in one game and sport an undefeated record going into the Clash For The Cup. We will see if Scottie “The Show” Lewis can help them keep the streak alive.

Team Twelve: Welcome to the big boys Team Twelve. Theodore Senior, Shaquest Chavis and Le’Vaun Miller lead the way for the Brooklyn boys. They have the speed and talent to surprise a few teams in this division.
Posted by basketball spotlight at 1:53 PM