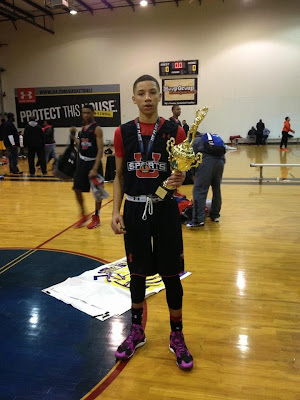 Atiba Taylor At The Clash

Monday was a great day because since it snowed the night before we didn’t have school. It snowed pretty bad so I just chilled for the day. Usually I’m always running around but I got a chance to catch up on some sleep, watched T.V., and played some video games. Before the night was out I did my usually push-ups and resistant band workout before heading to bed.


Tuesday I was back at school doing the norm. I got an A on my social studies test which was great and I realized that I didn’t have music class anymore, now I have T.V. studio which was even better news because I hated music class Lol. Later that night my boy Lewis and I went to workout with my trainer Chris in Jersey City. I’m really trying to fix my jumper because right now it’s not falling and neither are my free throws. One thing I know is the only way to fix them is to keep practicing and to keep shooting.

Wednesday was another snow day so you already know I was happy Lol. I slept till the afternoon; I had to take advantage of another free day. My dad and I were going to shovel the snow but because it was mixed with ice and the snow was extra heavy he just called somebody off of Craigslist to shovel because he said he wasn’t doing it and wasn’t going to help me Lol.

Thursday my team was back in the gym getting ready for The Clash Of The Cup Tournament this weekend. We did our usual workout before practice, ran all of our stuff, and then scrimmaged for a while. Practice was great and we felt confident about winning this weekend’s tournament.

Friday after school I just relaxed didn’t workout or nothing just wanted to get myself together for our early morning game against some team from Syracuse, we played them at 9am. Saturday is here and I’m up at 6:30am. I jumped in the shower got myself together and then we were off for the game. My bro Jahvon slept over so we was headed to the game together but had to scoop Nazi along the way. Our first game we played The Gymrats from Syracuse and then 6 Man Warriors from D.C. I think. We beat both teams but it was more like a good practice for us because that was Jahvon’s first tournament back with the team again so we were just trying to get our chemistry together.

Sunday was bracket play so every game is a must win and that’s what we did. We beat Team 12 from NY, a very good Team Takeover, and ended up playing The NJ Playaz in the championship game. The Takeover game should have been the championship game instead of The Playaz just because it was a better game for us but regardless we did what we had to do as a team and got the job done.

Next weekend we’ll be in Maryland for The Maryland Invitational Tournament so I’ll keep you guys post on what happens.