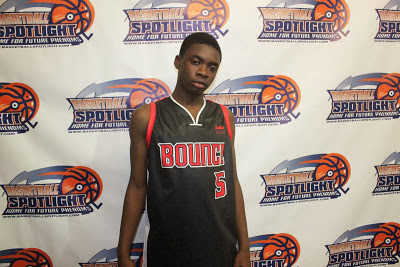 The 7th Grade Division produced a new champion and had some fresh names that played great. Here’s our second look into the top performers from the Class of 2019.

Tah-Jai Walters Guard (CIA Bounce)- CIA made it to the quarterfinals and Walters once again led the way. This dynamic guard poured in 28 points in their semi-final loss to the Rens. I know he has to be the best 7th Grade scorer in Canada because he’s one of the best in the USA. This kid flat out gets buckets.

Joel Brown Guard (CIA Bounce)- Brown is the backcourt mate for Walters and he also had a good showing. His play alone lets everyone know that he runs the show. This kid has some serious court vision and ball handling skills. He also can help out in the scoring if needed.

Dejournal Cook Forward (Metro Flyers)- Cook donned a new uniform in his second Spotlight event. This time in Neptune he rocked with the Metro Flyers and helped them advance to the semifinals. His best performance came in their quarterfinal win over Grand Finale champion Team Nelson in which he tallied 16 markers and grabbed a host of boards.

Danny Rodriquez Forward (Metro Flyers)- Rodriquez is another piece of the Flyers huge front line. Once again he was a presence on defense and also gave Team Nelson problems with 16 points. You can’t teach size and once again broad shoulders help take them to the final four.

Elijah Hicks Forward (6th Man Warriors)- The athletic forward was everywhere for the Virginia team this weekend. He’s quick off his feet and can convert once he snatches the offensive rebound. His quickness when running the floor makes me believe he probably also good on the gridiron. He banged Brooklyn Rens for a game high 19 points.

Terrence Williams Forward (Team Takeover)- Williams had to leave early for school team obligations but he graced us with his presence on Saturday. His best game of the day came in their narrow defeat of CIA Bounce in pool play. The talented forward tallied 15 markers to help his boys squeeze out the win.

Mark Bradshaw Guard (Team Nelson)- Team Nelson got bounced out in the quarterfinals but Bradshaw went down swinging. The talented southpaw went for 20 points in the loss to the Metro Flyers. He still has the ability to score in bunches.

Fahmir Ali Guard (Team Final)- There’s definitely not many that can score like Ali. The Delaware product slowly rocks defenders to sleep before scorching them with a pull up or floater. He seems to have settled nicely into his new home with Team Final.

Khyree Temple Forward (Team Final)- The forward came up big for Team Final before fouling out against Team Takeover. He finished the game with 15 points and was difficult to contain at times.
Posted by basketball spotlight at 12:34 PM