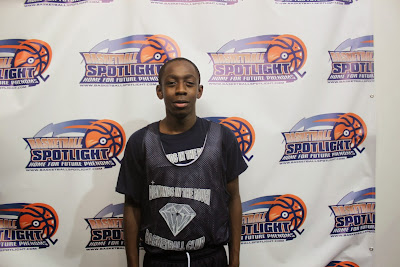 Maurice Works Guard (Team DEMI)- DEMI knocked off Team Scan and much of the production came from Works. This kid is hard to guard off the dribble and will pull up at the drop of a hat. His array of moves baffled the Scan defenders as he skated by. His tenacious style fueled his teammates which helped them get the win.

Cameron Reddish Guard (Team Final)- Team Final had a rough weekend at the Clash but reddish managed to do his numbers. His used his fluid jumper to move the defense and appears to have more strength when finishing through contact. “The Prince” tried to carry them through the tough battles but just ran out of bullets.

Chris Cropper Forward (We R 1)- Cropper had another good showing at the Spotlight. He showed some athleticism and ability to score. He came up big in the 8th Grade Blue Division championship against Team RIO.

Daquan Campbell Forward (Rens)- Campbell is an athletic wing with a muscular build which allows him to defend up to four positions on the floor. He brings the power and toughness that this Brooklyn group is known for.

Sahdique Watkins Guard (Rens)- While other guards play in a panic Watkins sets his own pace. Defenses try but can’t seem to speed the Brooklynite up. He gets wherever he wants on the floor while scoring or getting teammates involved.

Scottie Lewis Forward (Team RIO)- Lewis play was still explosive in the 8th Grade Blue Division. Each time RIP seemed to be in trouble Lewis would take his game to another level and push them through. One of the biggest obstacles were the Brooklyn Rens in which the youngster went on a scoring and shot blocking tear to pull out the win.

Bryant Antoine Guard (Team RIO)- I think the lion has awoke in this kid. Antoine played with an attitude which helped his game explode. He got to the cup whenever he wanted and displayed some decision making skills. This kid will be something to watch in a few years.

Jordan McKoy Guard (Team RIO)- McKoy was a big finisher once again. He fills the lane with the best of them and finishes with either hand. He’s one of the quickest players with the pill and possesses a quick first step. He does need to have more confidence in his outside shot.

Alex Klatsky Guard (Team RIO)- Klatsky shot the ball well from the perimeter this weekend especially in their semifinal win versus CMEK. He fit well in the pace of the game and found the gaps in the defense. His stroke was definitely working.

Jalen Brooks Guard (Team RIO)- Brooks hit a couple of big shots when RIO’s really needed them. In the Brooklyn Rens game he nailed a clutch three that buried the NY boys. Brooks rarely shows overwhelming emotions, I guess because he’s been in many big games before.

Jordan Hicks Guard (6th Man Warriors)- The southpaw has a slick handle and is hard to guard once he starts penetration. He uses an array of crossover moves and spins to dash past defenders. He’s not a great shooter but is a shot maker.

Jonathan Preston Guard (6th Man Warriors)- Preston on the other hand is a great shooter while also possessing the wiggle and size to get a clean look. He was a true match up problem especially when his jimmy was dropping. He’s a talent that will make you take quick notice.

Curtis Ballard Guard (Team 12)- Ballard is built in the mode of a NYC classic guard. He has the unique ability to get in and out of spaces in a flash. He loves to handle and get into the seams of the defense.
Posted by basketball spotlight at 5:35 PM