Clash For The Cup: 13U Top Performers (Here We Come) 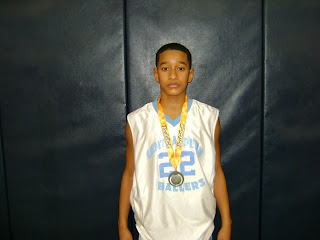 The 13U division also had some under the radar players that are ready for some shine. Here’s a look at the 13U Blue Division top performers.

13U Top Performers (Here We Come)

Kobe Gantz G (Central Penn Ballers) = This smooth guard is at his best when attacking the basket. Kobe is fluid with the rock and he is a good passer with good court vision. He is a good drive, draw and kick passer.

Nick Botelho F (Shooting Stars) = Nick has the ability to score in a variety of ways. He can connect on jumpers from beyond 3-point range as well as score in the paint. When he applies himself, he has the ability to cause match-up problems by taking bigger players out on the perimeter with his shooting ability and taking smaller defenders down to the block.

Montrel Morgan G (Central Penn Ballers) = Montrel Morgan is a young man that loves to compete and can make plays on the offensive. He is a good ball handler and passer but is at his best when he is attacking off the dribble. He works to pressure the ball on defense and has active hands on D.

Jahad Neibauer F (Central Penn Ballers) = Jahad is a blue collar forward that scores on the break. He is good rebounder and finisher that welcomes contact. Great straight line attacker but must work on dribble moves to beat the defender off the dribble.

Ray Cortez G (St. Michaels) = Cortez is a steady point guard with the ability to score and hit the money ball from deep. The kid plays with confidence that is important to be successful as a point. He is not afraid to make the tough play or take the big shot. His obvious strength is his 3-point shooting ability.

Anthony Gomez G (St. Michaels) = Gomez has very good quickness and uses his speed to get to the paint or create separation. He also has good court vision and distributes the ball well. He fits an up tempo system of play.

Troy Richardson G (Philly Freedom) = Richardson is one of those wings that can do just about anything on the court. He has a versatile game and can even post up and shoot over the top of smaller guards.

Jason Gibson G (CT Elite) = Jay Gibb is a true point guard that has all the tools to be a good player. Gibson can handle the ball, he can shoot the three and he can go by defenders with mostly change of pace dribbles.

Zack Howarth G (CJ Hawks) = Zack is a playmaking guard who can also shoot the three. He handles the rock and gets himself into the lane and finishes at a surprisingly high rate. His point guard skills in terms of running the team and good court vision was on displayed all weekend.
Posted by basketball spotlight at 5:52 AM