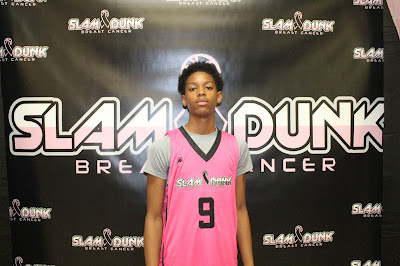 MVP-Rahmir Barno Guard (Philadelphia, PA)-Wow, Barno was spectacular once again. His breakdown ability was apparent as he scored and dished the rock. His stop and go or hesitation dribble kept the defense on their heels. He really understands how to create space off the bounce and he looked flawless in transition. His quickness and play making ability will make him a factor in the game for years to come.

Will Norman Forward (Lindenwold, NJ)- Another event
another dominant performance from Norman. He’s determined to make his presence felt once he steps on the floor. He drove past defenders while putting them on his hip and carrying them to the tin. Norman understands how to use his touch around the rim and will put together a bunch of buckets in a row. His impact on the game cannot be denied.

Cian Medley Guard (Sewell, NJ)- Coming off an outstanding performance at the Future Phenom Camp Medley cashed in again. His confidence with the rock is soaring through the roof right now. His shake and bake with flair don’t discount his substance when it comes to getting things done. He operates good from the pick and roll and in isolation situations. He also looks very good attacking along the baseline and using a feathery finish at the rim. South Jersey has another gem in this kid.

Brian Dawkins Guard (Philadelphia, PA)- Another no non-sense guard is Dawkins. He’s coming straight defenders with a legit handle and scoring or passing ability. He dodged shot blockers by maneuvering the rock when he got to the tin. The first line of defenders is at his mercy because of his sharp ball handling skills. He’s truly a throwback Philly type guard similar to Kyle Lowry and Malik Wayns.

Zion Stanford Forward (Philadelphia, PA)- Initially, I thought Stanford was a post player until I saw him handling and scoring after drives. He had mid-range touch and the ability to pat the rock on the deck. I think his perimeter skills will only increase as he becomes more confident creating plays beyond the arch. He showed well in this event.

Tyrell Pitts Forward (Trenton, NJ)- The capital city kid showed well in his hometown. One of the most athletic players in the building Pitts shines slashing and finishing off plays. He’s a point guard’s dream in a transition situation as he capable of playing above the rim. Working on his in between game will take his stock to the next level.

Calvin Moore Guard (Trenton, NJ)- The other hometown kid shook off a slow start and go it going. He showed good penetration skills and ability to hit big shots. He also showed some finishing ability in traffic. With 10 seconds left Moore drained a trey ball that put his team up 2 with 3.1 seconds left. He should be a player to watch out for this season.

Devon Johnson Guard (Pine Hill, NJ)- Johnson just gets it done. I coached against him and he gave us problems with his consistency in terms of finishing. He knows how to hit the gaps in the defense and find his lane to the bucket. His strong frame has defenders bouncing off him. He can become a real scoring problem moving forward.
Posted by basketball spotlight at 9:03 AM