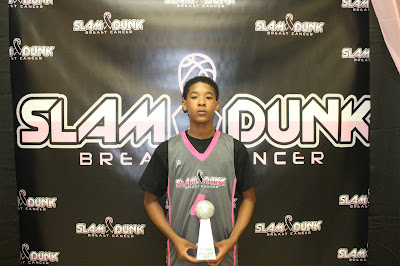 Team Faith held off a late rally by Team Pride to win 73-69 at the Slam Dunk Breast Cancer 7th Grade matchup. Here are the top performers from Team Pride.

MVP- Mike Jones Jr. Guard (Ewing, NJ)- “Deuce” had the best performance of this entire event. He was scorching from all three levels and even gave the crowd a treat with a few jelly layups. He’s difficult to contain because his handle gets him anywhere and he can pull up off a dime. When his jump shot is falling like it was at this event he’s a nightmare for the defense. He played with total confidence and took command of the court while finishing with 31 points.

Naiim Parrish Guard (Howell, NJ)- This slick point guard knows how to get everyone involved. He’s very smooth with the rock and doesn’t over penetrate. He has some scoring ability but loves to see his teammates get off. Good luck trying to trap this kid because his breakdown ability is legit. He was a great addition to this event.

Shamar Cox Guard (Vineland, NJ)- Cox floater game is mean. His quickness allows him to blow past defenders and get in the lane at will. His body control helps him maneuver around shot blockers when scoring at the tin. The kid is a jet with the rock.

Anthony Gikes Forward (Harlem, NY)- It wasn’t a great day for Gikes but you can see the potential oozing from his veins. The lanky forward just needs a little more seasoning and strength which will come shortly. When it all comes together you might be looking out the next stud from the Northeast.

Jaden Barnett Forward (Elizabeth, NJ)- Before getting injured Barnett played the game with great passion. Not only did he contribute offensively but he also did it on the defensive end and on the glass. He was willing to do the dirty work to help his team during the contest.

Dahmyr Edwards-Chew (Ewing, NJ)- Edwards-Chew showed me a few things in his Spotlight debut. He operated from the wing and made some decent moves to the basket. Once he gets more experience playing at this level his confidence will kick in. I also like the potential size he seems to have.
Posted by basketball spotlight at 2:41 PM