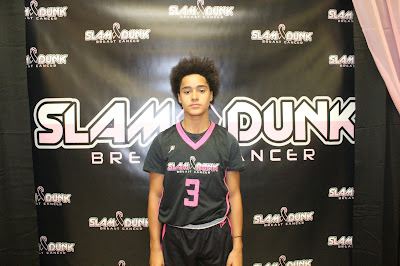 MVP-Elliot Cadeau Guard (Florham Park, NJ)- The point guard had everything flowing Saturday. His set up skills were on point and he scored the rock with ease. His mid-range pull up was burning the net and he excelled in transition. Cadeau led the team in scoring and made the game winning assist pass to Pettiford. He had a remarkable afternoon while taking home MVP honors.

Akil Watson Forward (Middletown, NJ)- Watson spent the afternoon running the floor and finishing on the break. His length and athleticism stood out on defense also as he played the passing lanes. I like how he finished though contact and stepped up big in the closing moments.

Simeon Wilcher Forward (Plainfield, NJ)- Wilcher is another legit wing that stood out in this event. He could either torch you from deep or finish or you at the tin. He also showed some above the rim prowess as he flushed one on the fast break. I see some bright things in this kid’s future.

Jarrett Dingle Guard (Hempstead, NY)- I heard a lot about Dingle but this was my first time seeing him rock. I must say I was impressed with this lead guard’s game. His handle allows him to get anywhere on the floor and his craftiness helps him score among the trees. I like his body control and ability to finish through contact. Keep an eye on this kid.

Mo Mo Mcknight-Coleman Guard (Jersey City, NJ)- Mo Mo started out playing a little too fast and then he settled down. I like how he found his way around the floor and picked his spots to attack. He has the confidence to pull up from anywhere. His deep trey ball was a momentum changer that helped his team to the victory.

Malachi Johnson Guard (Irvington, NJ)- I like this kid’s determination on the floor and his midrange pullup. He’s wired to score and will let it go mid dribble. He doesn’t back down from no one and plays with a chip on his shoulder.

Precise Clark Forward (Brooklyn, NY)- The big fella was a huge problem for opponents as he anchored the post. He’s still developing stages in terms of getting position and footwork. But he does give his team many second chance opportunities by crashing the offensive glass. He was also able to score some put backs with some soft touch off the glass.
Posted by basketball spotlight at 12:51 PM