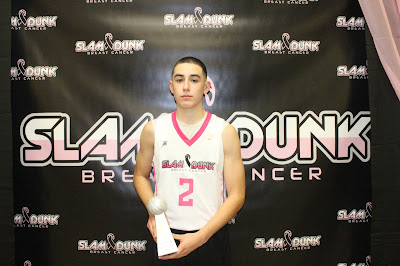 Team Faith held off a late rally by Team Pride to win 73-69 at the Slam Dunk Breast Cancer 7th Grade matchup. Here are the top performers from Team Faith.

MVP- Dylan Seay Forward (Brick, NJ)- Coming off a great performance at Future Phenom Camp Seay kept the ball rolling at the Slam Dunk Breast Cancer. Seay combines a mean skill set with a great basketball IQ. He’s too big for most guards and too quick for many forwards to cover. His size allows him to shoot or pass over defenders with ease. When his confidence is really flowing he’s known to add a little mustard to his game also. Going into the season he’s definitely a Player Of The Year Candidate.

Samir Thomas Guard (Somerset, NJ)- Thomas looked good playing alongside Seay. He makes a living getting to the basket and finishing in traffic. He’s strong enough to bounce off defenders and cleaver enough to finish off the plays. I like his feel for the game and size for the position. He’s a volume scorer that can get buckets in a hurry.

Thomas Sorber Forward (Trenton, NJ)- Sorber showed some extended range on his shot along with banging inside. He has improved on his footwork and touch near the basket. He doesn’t mind sealing defenders under the cup before kissing it off the glass. Him becoming a little more mobile could take his game to the elite level.

Yazir Tickles Guard (Wilmington, DE)- Wow, it was a pleasure watching this youngster rock. Tickles set the pace from the point position. Once he puts his body on the defender it’s curtains. He literally carried defenders where ever he wanted on the floor. I like his penetration skills and ability to score around shot blockers. He has an old school type of game which means its more substance and less flash. Right now, he has our attention.

Amir Williams Forward (Wilmington, DE)- The Delaware forward has made the full transition to the wing. I love his smoothness when he has the rock and his ability to put the ball on the deck. Don’t get me wrong he still can get buckets on the post when needed. Once he picks up a little more fire he’s going to be a real problem.
Posted by basketball spotlight at 7:10 AM