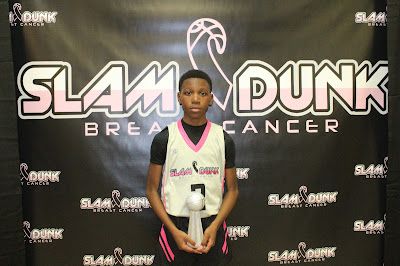 Team Spirit came back from a late deficit to defeat Team Survivor 70-69 in overtime to win the 6th Grade Game of the Slam Dunk Breast Cancer. Here’s a look at Team Spirit Top Performers.

MVP- Samaj Long Guard (Maplewood, NJ)- To say this kid has the rock on a string is an understatement. He broke down defenders with ease and either scored or dropped a dime. I like how he could get any shot he wanted and pull up on a dime. In transition he did lead the break and was a true crowd pleaser. He was a true joy to watch and truly deserved the MVP.

Jebron Harris Forward (North Brunswick)- Harris spent the afternoon pinning defenders under the basket. He used his touch to kiss it off the glass or drop it in the bucket. He also was a menace on the boards. I like how his footwork is developing and how he can handle the pill on the perimeter. He’s a serious problem once he gets going.

Richard Rosa Guard (Paterson, NJ)- This kid’s court vision is through the roof. He penetrates the lane and hits cutting teammates on a dime. He also loves feeding his comrades on the break. When Richard is not passing he can also get you a bucket. He displayed good body control and ability to score through contact.

Olin Chamberlain Guard (Harleysville, PA)- The powerful scoring guard came on in the second half scoring the last 7 points in regulation. He likes to take opposing guards deep into the paint and rise up over them for a bucket. He’s difficult to contain when he’s playing under control. He also doesn’t mind getting it in on the defensive end.

Peter Mavro Guard (Manalapan, NJ)- Marvo played the game with serious intentions. He pushed the rock up the floor like a true general. I like his drive and kick game and also his ability to score buckets in traffic. He seemed very focused on the floor and helped his team get the victory. I like this kid’s game.

Jaren Barnett Guard (Elizabeth, NJ)- Barnett midrange pull up was his weapon of choice for the afternoon. He got into the lane and either pulled up or used a floater. He hit a couple of them when things got crucial down the wire.

Amir Wheeler Guard (Trenton, NJ)- I like how this guard was in attack mode especially in transition. He had an array of scoring moves and knew when to turn it on. I also like his outside touch when shooting. Keep an eye on this kid.
Posted by basketball spotlight at 7:05 AM