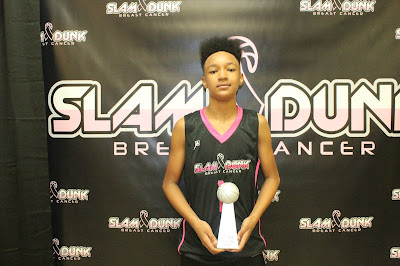 Team Spirit came back from a late deficit to defeat Team Survivor 70-69 in overtime to win the 6th Grade Game of the Slam Dunk Breast Cancer. Here’s a look at Team Survivor Top Performers.

MVP Judah Hidalgo Forward (Pennsauken, NJ)- Once again the versatile forward put on a dominant performance on both ends of the floor. He used his length to stretch out for buckets on drives, killed the boards, scored on put backs and showed touch from the perimeter. On defense he was a shot blocking machine which lead to several fast breaks. On this level he’s truly a matchup problem because he can get it off the glass and push the rock himself.

Jordan Ghee Guard (Totowa, NJ)- Ghee is just a natural scorer. I love his mid-range game but he can also stretch the defense from deep. In transition he fills the lane well and is a true bucket getter. His play early on helped Team Survivor take a huge early lead. When you combine his potential size and game I think Ghee has a serious future ahead of him.

Tai Turnage Guard (Queens, NY)- Tai “Turnup” did just that at the Slam Dunk Breast Cancer. He’s mastered the art of setting up defenders for dribble moves which opened the lane like the Red Sea. Once Turnage got inside his draw and dish game was in full effect. If you tried to over play the pass he killed you with a floater or pull up. The crowd simply enjoyed this kid.

Jayson King Forward (Jackson, NJ)- King was an energy player that did a little of everything on the floor. I like how he got after it on the defensive end by moving his feet well and playing the passing lanes. He also contributed into his team’s offensive success.

Tyler Hammond Guard (Ewing, NJ)- Hammond had a good outing at the Slam Dunk Breast Cancer. He ran the point, made sure everyone was involved and was still able to get buckets also. I like the shiftiness in his handle which keeps the defender off balance. I also like the body control he showed when he was finishing off plays. He played with supreme confidence at this event.

Terrence Traylor Guard (Trenton, NJ)- Traylor was in attack mode all afternoon. He got his buckets along the baseline and when slashing from angles. I like the fact that he wasn’t afraid to breakdown defenders and finish at the tin. He also gave a good effort on the defensive end.

Rasheem Yon Guard (Trenton, NJ)- I loved Yon’s ratchet from deep. He pulled up in transition or in the half court set. If you tried to overplay his jumper he can drop it on the deck and get to the cup. He plays the game with guts and determination.
Posted by basketball spotlight at 5:47 PM