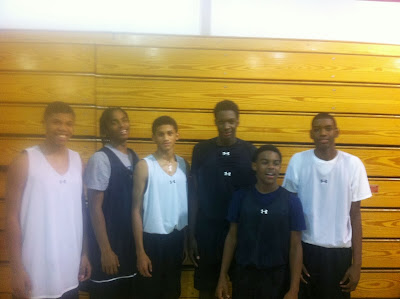 Myles and Crew At Under Armor Grind Session

There is a long line of athletes in my family. My uncle played along with Dan Majerle at Central Michigan. My great uncle played with Spencer Haywood in high school. Then he followed his legendary high school coach Will Robinson Sr. to Illinois State, where he played with Doug Collins. My dad was and still is the all-time leading scorer at his high school. He played Division II basketball at Millersville University. My grandfather was a Golden Gloves boxing champion. Even my grandmother was a two-sport athlete at Millersville University, playing both basketball and lacrosse. My basketball career started in Detroit, MI. I would go to St. Cecilia Rec Center "The Saint", where I would see pros like Derrick Coleman, Steve Smith, Chris Webber, and Jalen Rose. Watching all of these great players made me want to play more. My first AAU team was Detroit Elite. In my first year at 8U we won the National Championship in Memphis, TN. I thought that Detroit was the best place for basketball, and then we moved to the DMV. I found that the competition and coaching here in the DMV is the best.


Playing basketball in the DMV is different from anywhere else in the country. Basketball is the biggest sport in the area. There are many teams and organizations that you could play for in the DMV. The atmosphere is wild and crazy and that's just my Mom. There is a lot of support and pride for the teams you play for. Sometimes I think it gets too competitive and parents and coaches overreact to wins or losses and even bad calls. Playing in such a competitive environment all of the time makes for rivalries with teams and players. One of the best rivalries I've ever been a part of was between my Metro Sixers team and DC Assault. We've battled for MIT, Regional, and National titles since I have been nine years old. The best part of those rivalries was the fans and the excitement in the gym. When we scored the crowd would go crazy and I would hear Mr. Terry saying, "METRO" and everyone else yelled, "SIXERS". D'Marco would get a block and start a fast break and the DC Assault fans would say, "ASSAULT...ASSAULT". This kind of experience has made basketball exciting and fun.

I've had a chance to grow up playing against really good players. My biggest individual rivalry has been with D'Marco Baucum. We were the two biggest kids on the two best teams in the area since we've been nine. It's been fun and challenging to compete against D'Marco. Now that we're older, we respect each other's abilities and talents. We probably will be playing against each other for four or five more years. And if we're lucky we could end up on the same high school and AAU team. I had a chance to play in the Under Armor Grind Session this weekend. Many of the players I've played against over the years were there to showcase their skills. There were a lot of high school coaches there recruiting players to go to their school. The gym had the same high energy that I've come to expect from the DMV fans. All of our games have gotten better and we are ready to compete in high school next year. We hope to follow in the footsteps of the greats that came from this area like, Kevin Durant, Carmelo Anthony, Michael Beasley, Rudy Gay, Sam Cassel, Grant Hill, Roy Hibbert, Jeff Green, Len Bias, Johnny Dawkins, and Victor Oladipo.
Posted by basketball spotlight at 8:35 AM