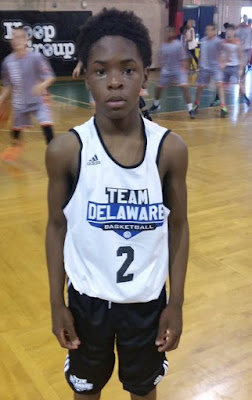 The Basketball Spotlight 6th Grade Division was action packed all the way to the finals. Here’s Part 2 of our top performers from this grade level.

Hakim Henry Guard (Team Delaware)- There is always a player that is overly impressive during their Spotlight debut and Henry was that kid at the MDC. This kid had the smoothest handle in the building and seemed impossible to press. He dribbled through defense and dropped dimes to cutting teammates. He anticipates the game on another level and plays with extreme poise. He made it his business to make his name known. Great job kid!

Zion Cruz Guard (Hilltoppers Heat)- Cruz showed up with his new squad and still put in his usual work. Cruz grew a few inches and uses his added size to hit the midrange pull up and finish at the rim. He also he displaying improved point guard skills in terms of setting up teammates. He has the skills and passion therefore if he continues to grow he could be an emerging prospect in years to come.

Brandon McCreesh Forward (Riverside Hawks)- The versatile forward found his range from the perimeter against stubborn Wall 2 Wall. He was able to drain four triples and help his team advance to the semifinals. I like his stroke and confidence on the perimeter.

Isa Khalid Forward (Riverside Hawks)- The hard working forward made his presence felt in the scoring column. He did damage inside and showed some range beyond the arc. He did most his work the first two games; he had 15 points versus the Stingrays and 17 markers in their Wall 2 Wall victory.

MJ Carothers Guard (Riverside Hawks)- Carothers can run the show but he can also shoot the pill. He heated against Wall 2 Wall (four treys) and Team Final (four treys). His ability to stretch the defense was huge in Riverside’s success.

Supreme Niles Guard (Riverside Hawks)- Niles is another pesky guard for the Hawks. He played both ends of the floor well and isn’t afraid to push the rock into the teeth of the defense. He also got into the scoring column averaging close to 10 points a contest.

Nick Padilla Guard (Riverside Hawks)- The two guard came up big against Team Final as he nailed four treys while scoring 18 points. When his stroke is own it makes the Hawks a more dangerous team. He can really fill it up.

Nikkos Kovanes Forward (Team Loaded)- Kovanes plays the 1 thru 5 and known around the country as a top scorer. During the MDC he bullied his way through defenders and finished at the cup. He was also relentless on the glass. He refuses to be outworked on the floor.

Quanye Veney Guard (Team Loaded)- Veney was one of the smoothest point guards I saw in this glass. He runs the team with good poise and has a good midrange game to go with it. I definitely see him becoming a household name in a few years.
Posted by basketball spotlight at 8:53 AM