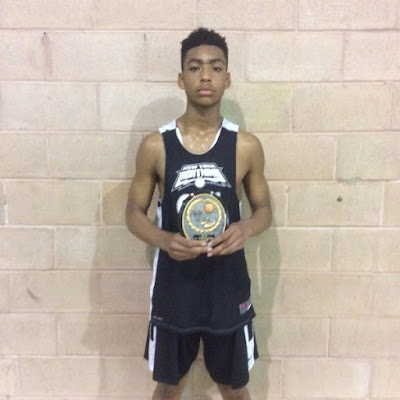 The Basketball Spotlight MDC 7th Grade Division had some serious talent. Here’s a look at our top performers.

Quron Zene Jr. Forward (NY Lightning)- I first noticed Zene during the semifinals where he was unstoppable against the NY Rens. Once he gets deep post position he uses explosive moves and a high motor to get the job done. He scores the rock with a high percentage and I should be a name to know for years to come.

Alakiem Melvin Guard (NY Lightning)- While Zen provided the inside punch, Melvin did the work on the perimeter. The combo guard who will eventually transition to the point scored the rock from all three levels. I like his game off the bounce and the way he creates. In the championship he finished with 19 points in the victory.

Tymell Stevenson Forward (Brooklyn Rens)- Stevenson was one of the best looking prospects in this grade level. He has the size, long arms and athleticism to get the job done. On defense he hit the glass hard and either blocks or tries to alter shots in his area. He averaged nearly 16 points per game.

Shaun Fulcher Guard (Brooklyn Rens)- Fulcher picked up the scoring also for Brooklyn Rens. He showed he could stroke the ball from the perimeter including 3 treys against Jersey Force. His biggest game came in the semi-finals when he scored 20 points and nailed 4 treys against NY Dragons. He’s a great compliment for Tymell Stevenson they bring a good one-two punch.

Sterling Jones Guard (NY Rens)- Jones brought his game during the MDC especially he pool play. He went for 16 points against WE R 1 and then dropped another 21 markers versus MBK Knights. Once he gets hot he showed he could take over the game. He has put together quite a season.

TJ Morris Guard (NY Rens)- It’s TJ’s all-around game that makes you love him. He can score, find teammates and rebound with the best of them. He also has good size and athleticism to match. I’m anxious to see how he develops the next few years.

Marcus Dyes Forward (NY Dragons)- Dyes once again carried the scoring load for the Dragons. He’s truly a matchup problem and a major reason for the NY Dragons recent success. He averaged double figures including a team high 20 points versus the NY Rens.

Noral Brown Guard (NY Dragons)- Brown came alive in their semi-final showdown with Brooklyn Rens. The strong guard went for 19 points in the loss while showing his physical game. He’s hard to contain inside the lane and in transition.

Jayden Pierre Guard (NY Dragons)- Pierre has settled in and looks comfortable running the show for this team. I like how he sets the pace while also driving, drawing and dishing. He was much needed added piece to this squad.

Sam Fagan Guard (Jersey Force)- Fagan caught fire in their game against the Brooklyn Rens. The crafty guard nailed 6 treys on his way to 24 points. He has to be one of the shooters in the region.
Posted by basketball spotlight at 7:32 AM