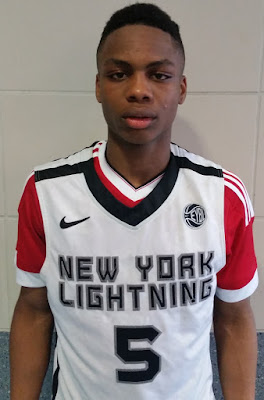 The 8th Grade Division of the Memorial Day Classic had some of the top talent in the region. Here’s part 1 of our report from Neptune.

Posh Alexander Guard (NY Lightning)- Alexander was a demon in transition. He converted easy buckets and played above the rim on a couple of breakaways. His explosiveness is something to watch and he has some of the best body control I’ve seen in a while. This kid definitely leaves it all on the floor.

Quran McPherson Guard (NY Lightning)- When Alexander wasn’t scoring McPherson did his thing. The lanky wing is a natural scorer the flourishes in the open floor. In the half court he will launch it from trey land or finish in traffic. He averaged close to 20 points a game and also had an argument for MVP.

Amir Spears Guard (NY Lightning)- Spears is turning himself into a good point guard. While others were getting buckets Spears decided to be the setup man. I like how he has relished in his role which has helped the NY Lightning succeed.

Trey Hall Forward (NY Lightning)- Hall wasn’t spectacular but still had a solid weekend. He hit the boards hard and was able to get a few buckets. He didn’t force the issue but instead let his teammates shine which shows maturity. He continues to be a match up problem.

EJ Evans Guard (Team Final)- Evans has a quick trigger and is capable of scoring from all three levels. I like his driving skills and he has the frame to absorb contact. I would like to see him work on driving left a little more which will make the defense more honest.

Noah Collier Forward (Team Final)- Collier impressed with his length and face up game. I like his touch from the mid-range area including the free throw area. He’s fluid when running the floor and seems to be developing decent post moves. He has the chance to be a top notch prospect.

Lynn Grier Jr. Guard (Team Final)- I like how Grier is making the transition to point guard. He’s showing the ability to see the floor and set up teammates. He has explosive moves and a sharp handle. Don’t get me wrong he did still score the rock when he had to and his squad needed it.
Posted by basketball spotlight at 8:33 AM