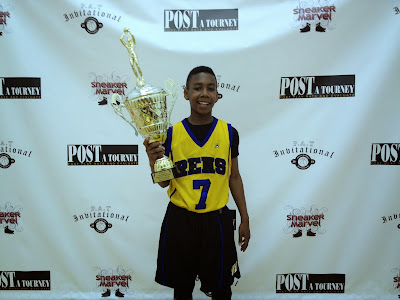 Hello Basketball World This is Judah McIntyre signing in again.

Happy Monday!!! Well this week, I have a lot of preparation to do – Tests, quizzes, school games and tournaments. On Monday, I went to school, got some extra help on Math for an upcoming exam. I stayed late after middle school practice to work on my game after that devastating loss.

On Tuesday, I had a major math exam, which I was able to do well on, due to the fact that I studied. Hey guys studying works!!! I had a game, which we lost by 2. We should not have lost that game, but you have to follow what the coach says. Some losses are ours and some are theirs.

By Wednesday, the preparation for the P.A.T Invitational began for me. This tournament is usually a big tournament in New York. Many teams believe that the tournament is a “RENS” tournament, but my dad actually started the company and runs the tournament. For me personally, I was working on my game because we playing 15u in the tournament. I did not know which team was going to be in my pool so I spent time working on my game. I also spent time helping my dad order the trophies, rings, shirts etc. I have to say I have a new level of respect for everyone who runs tournaments. Many people complain about the schedule, but it is hard work to get it right – especially when everyone is calling asking for specific times to play.

Thursday, I went to school, took a Spanish exam. I did well on the exam. We also began to prep for our 8th grade trip to Washington next week. President Obama is suppose to give the state of the union address while we are there. Thursday, I had an afternoon game, which we won. I had 28 points and 10 assists. I reminded myself though that being a point guard is more than just scoring. It is making sure that everyone one is better and happy when you are on the floor. The only thing that bothers me though is that very few people write about point guards who lead, assist and make everyone better. Most people write about the player who scored 30 points.

Friday, I went to school. The day was light because we were in full preparation for our Washington trip. We went over the sites we will see, where we will stay, what we should bring. The P.A.T Invitational – Best In the East – Part I tournament began at Island Garden. My dad picked me up early and we went to Island Gardens early to setup.

Saturday – we played and won our pool. I thought the team played like a team and won. The tournament was going well, the games ran on-time Thank God!.

Sunday was crazy!!!. My dad had to delay the tournament start time for 1 hour. Many parents and coaches were calling in due to what is now known as “black ice Sunday.” Some parents were in accidents trying to get to the tournament. My mom watched a 20 car crash on the GWB as many cars could not stop due to the ice on the road. While some teams from upstate forfeited their games due to the weather, most of the teams made it games. I am glad we were able to get through the tournament. RENS 8th grade, won the 15u division. We will receive our championship rings in a few weeks.

Next week, I am off to Washington DC. I can’t wait to tell you about my trip. The next couple of weeks will be interesting as we prepare for BBallSpotlight - Winter Warz – I hear team RIO will be playing. Also the “Little Ballers” documentary is coming out on All-Star weekend – which I will tell about as well. Until next time!

Judah McIntyre signing out. Remember use basketball, don’t let basketball use you!!!
Posted by basketball spotlight at 8:12 AM