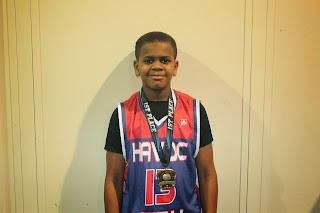 The 5th Grade Division of the Clash For The Cup gave us a glimpse into the future stars. Here’s a look at some of the top performers from the weekend.

Ferrell Crowell Guard (Havoc City)- Crowell shined bright during the Clash For The Cup. He had the trey ball falling all weekend and was able to put up some decent numbers. He tallied 14 pts. vs WDBA, 14 pts vs. Delaware Finest Stars and 13 markers in their championship victory over the Commission. He was one of the top performers at this event.

Dug McDaniel Guard (Havoc City)- Point guards like quarterbacks are judged on performance and winning. McDaniel has done both on a high level thus far this season. The ball handling and passing wizard had led his squad to back to back Spotlight banners and the #1 ranking in the region.

Kamaren Rodriquez Guard (Havoc City)- Yes, the NYC point guard joined HC for the Clash For The Cup. Once he got used to his new teammates his game began to pick up. He made a good contribution in the finals by scoring 11 points in their victory.

Jay Johnson Guard (Havoc City)- Johnson led the team in scoring in the finals with 14 points. The pint size scoring guard has mastered the floater and can put together some nifty moves to get to the basket. This kid is not bashful and will be willing to put it up at any time. I like his aggressive style of play.

Antonio Sellers Guard (National Select)- After helping Havoc City win the Tip Off Classic the top rated player in the land lent his services to National Select. Sellers once again showed way he’s difficult to stop on this level. He has the size to bully through defenders but his skills take it to the next level. He can handle and shot with accuracy while possessing a unique feel for the game. He tallied 14 markers against Havoc City and 14 points in their semifinal loss to The Commission.

Jayden Johnson Guard (National Select)- The strong combo guard also got into the action for National Select. He’s very explosive on this level and it really stands out in transition. He finished with 13 points in their semi-final loss to the Commission.

Chase Martin Forward (Commission)- Martin plays the forward spot but moved with the quickness of a guard from the high post. Once he got the rock he faced the defense and forced his way to the cup. His 14 points helped The Commission get past National Select in the semi-finals and earn a championship bid.

Jaqwan Sanders Forward (Commission)- Sanders also got into the action versus National Select. He also knows how to get his points near the cup while using size and skills. He also scored 14 points in the semi-finals. These two give the Commission a chance to beat anyone.

Sammy Scott Guard (Banneker Kings)- Scott continues to be one of the most electrifying guards in this class. His ball handling is very effective especially when he’s under control. He sees the floor with the best of them but can also put it in the basket. He had one of his best efforts with 13 points in their semi-final loss to Havoc City.

Andrew Rhebottom Forward (Banneker Kings)- When this kid is in his groove the defense is in trouble. The long, lanky forward has good touch and scoring ability. I like how he runs the floor and practices good fundamentals. Someone is teaching him the game very well. His big games were 20 points against Slam City Glory and an 18 point outing versus rival B’More Finest.
Posted by basketball spotlight at 8:06 AM