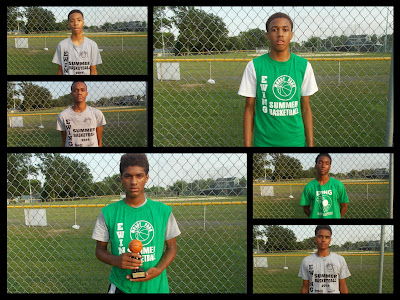 The Moody Park Summer League wrapped and Basketball Spotlight was in the building. First we took a look at the All Star Game which didn’t include the players that were playing in the championship game.

MVP- Jacquay Mendez Forward (Green Squad)- Mendez took home the MVP honors while playing an all-around game. He rebounded, scored and played good defense. He has a high motor and is willing to sacrifice his body and game for his team’s success. I like his size and also heard he excels in the world of football and baseball so his future seems very bright.

Shemar Robinson Guard (Green Squad)- If I had the vote for MVP Robinson would have taken home the MVP award. This guard simply played at the different speed then his peers in this contest. He has lightning speed and an array of dribbling moves that allows him to cruise into the lane. Robinson had some big time finishes at the tin but really impressed me with his court vision. When he drove down the lane he was eager to hit moving teammates on point. At times he gave the crowd a treat by putting some mustard of his passes.

Jordan Livingston Guard (Gray Team)- The Gray team fell behind big early then Livingston stepped up and took over. First he displayed his outside shooting by draining treys from around the arc, next he broke defenders with a smooth crossover that allowed him to finish at the cup. He not the quickest guard in the world but his craftiness allows him to get anywhere on the floor. On the other side of the ball he will need to improve his foot speed to play man to man defense.

Yeshua Powe Guard (Gray Team)- Powe is totally wired to score. He has a good mid-range shot but can also stretch it out to the 3 point line. Once he got going he scored in bunches. I like the wiggle he shows and toughness to score in traffic. He reminds me of Miles Simon the former star from the University of Arizona.

Cartier Bowman Forward (Green Team)- Bowman benefitted well from Robinson’s penetration. He showed good hands when catching the rock and finished well at the cup. He’s a good athlete and has good length. I also like the motor he possesses when playing on the floor. On defense he showed some shot blocking ability and rebounded the pill.

Ijon Rasberry Forward (Gray Team)- I really believe this kid has a chance to make a name. Right now he’s more prospect than player but that could all change in a few years. He has good size and tries to handle the rock but it appears awkward because he doesn’t have control of his body yet. While some spectators found this comical I imagined how he would look once he good everything together.
Posted by basketball spotlight at 12:04 PM