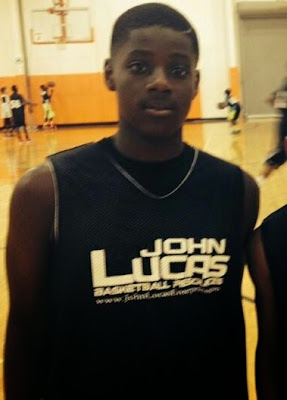 The Basketball Spotlight Future Phenom Camp reached out to Ohio as Isaiah Kennedy of Dayton has decided to bring his talent to Districts Heights, MD. The rising 7th grade combo guard has shown his skills all around the country including John Lucas Camp. The big bodies guard can see the floor well and shows some good instinct when making plays. He has a savvy handle while also using a nice floater among other scoring techniques. Now he has the chance to show that he handle the load against the best in the country.

"Isaiah seeks the opportunity to test his skills among the nations top young talent. He is a gym rat who works daily on his game. He's relatively new to the AAU scene (two years) but is ranked among the Top 10 players in Ohio. Now he is hungry to compete against the best in America" said his father.

Posted by basketball spotlight at 12:05 PM