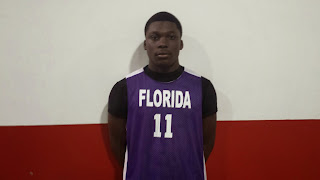 They don’t come any tougher then Team Florida’s Bryan Sanders; just committed to the Basketball Spotlight Future Phenom Camp – Sanders just adds to the gauntlet of top guards at the premier event of the summer. There is no player at his position with a stronger frame; physically imposing his tools and skill set are scary good as well. He is explosive; his transition package is one of the best either with the ball in his hands on as a finisher. His is a player who wants to win and will run through a brick wall to do so. A deceptively adept handle will put defenders on their toes if not that backs; he will make an impact on both boards often pushing directly off a defensive rebound – when he switches to his scoring mode he can dominate at the two spot also.

Sanders uses his mid-range package combined with his pull-up game to pressure defenses and his three point range to space the court for future drives to the basket. Underrated as a defender he flat out puts up numbers on that side of the ball too not just as a on ball defender but also by playing the passing lanes. Bottom-line Bryan has shown himself to be one of the most complete and versatile players in the 2019 and he plans on bring his entire tool box to the Spotlight so that he can go to work on the competition. The Future Phenom Camp doesn’t offer any of its players workman comp; so anyone in attendance better bring their hardhat and lunch pail on August 23rd & 24th

Posted by basketball spotlight at 9:43 AM