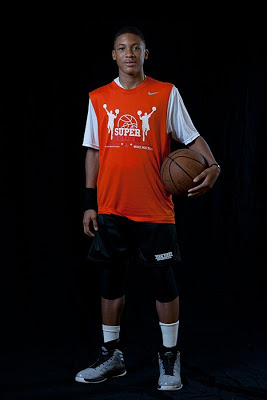 Rising 9th Nate Pierre Louis of Plainfield, NJ has been offered a basketball scholarship to Rutgers University. Pierre Louis has been starring on the Spotlight circuit for several years and has twice won Player Of The Year. He is currently rated as one of the top guards in the Class of 2017 and will be attending St. Peters Prep next fall.

Pierre Louis is happy but also remains humble about the offer. “I would like to thank Rutgers University and Coach Jordan for offering me an official scholarship this week. I also would like to thank Coach Deck of St. Peters Prep for believing in me as an incoming freshman. This is such a humbling experience and it’s pushing me even more to stay “Humble and Hungry”. I have to become the man and player everyone believes that I can become. Thank God I have four years to do so. I’m just a freshman” said Nate.

Basketball Spotlight would like to congratulate Nate and his family on this awesome news. Just stay focused and remember this is just the beginning.

Posted by basketball spotlight at 10:26 AM