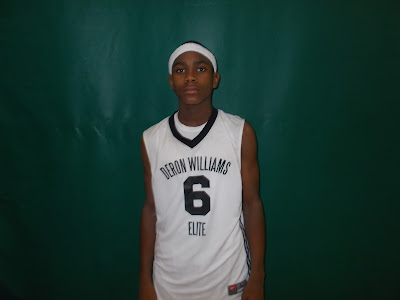 The 6th Grade AAU final four took place yesterday and Basketball Spotlight was in the building. Here are the players that impressed us the most in Hampton.

De’Vion Harmon Guard (D Will Elite)- Harmon swag was on 1000 versus Memphis War Eagles. The lefty gunned them down from deep and the mid range area. His hot shooting from the beginning of the game helped Deron Williams All Stars deliver the knockout blow. I like his bouncy game and the way he attacks defenders.

Chris Harris Guard (D Will Elite)- Speaking of shooting this kid definitely has a ratchet. He made a living off of catching and shooting the pill from three point land. I did see that he could put the ball on the floor but why take the chance when his jumper is so wet.

Tyrese Maxey Guard (D Will Elite)- Once Maxey started hitting long bombs it was curtains for Memphis. He has serious range and a demon in transition. He plays a lot bigger than his size.

Wendell Moore Forward (Carolina Preps)- This kid does it all. He rebounds, passes, handles the rock, scores and will lock down guards on defense. Moore impacts the game like very few in this class. He never stops working on the post and he skies over everyone to snatch boards. His future is very bright.

Mike Green Guard (Carolina Preps)- Green has to be the best pure shooter in this class. Once the lefty sets his feet you can put that money in the bank. He drilled All Ohio Red for four treys and a few other nifty buckets. He’s always a threat on the floor.

Kobe Langley Guard (Carolina Preps)- Langley is definitely one of the most exciting players to watch. He has an array of moves off the dribble that can leave defenders dizzy. He’s a pre scorer with a splash of play making ability. I can also see that his athleticism will be through the roof soon.

Jerome Francis Guard (All Ohio Red)- Francis was a rock solid point guard all night. He used his strong frame to get where he wants on the floor and used a decent pull up to score points.

Jordan Mitchell Guard (All Ohio Red)- I heard a lot about Mitchell and he did show me a good skill set. I would like to see him more involved at times but I guess that will come later on.
Posted by basketball spotlight at 10:07 AM