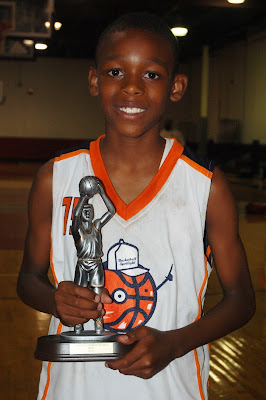 The Basketball Spotlight Future Phenom Camp Class of 2024 presented us with some of the top baby ballers in the country. Here’s Part 1 of our top performers from this grade level.

Travis Upchurch Guard (Connecticut)- Basketball Spotlight has been the testing ground for big time Connecticut players and Upchurch has chosen the same road. This scoring guard was spectacular at the Future Phenom Camp. He played the game at a different speed and skill level than most of his opponents. His ball handling, change of direction and scoring prowess stood out to us. I like his smoothness and feel for the game at such a young age. He cleaned up with  MVP and Best Prospect honors.

Blake Harper Guard (Washington, DC)- The southpaw is a crafty scorer with a powerful frame. He can get it done driving the rock or posting up on the blocks. He also isn’t afraid to get his hands dirty inside attacking the glass for boards. He shows good body control when finishing in traffic.

Tyrin Bizzelle Guard (Maryland)- The coach’s son is well drilled and plays with some explosion on both ends. He pushed the rock and is willing to set up shots for himself or teammates. His play earned him a spot in the Top 20 All Star Game and take home best play maker award.

Kareem Thomas Guard (Delaware)-His speed and power allows Thomas to play the game advanced on both sides of the floor. He was really impressive in the open floor and finished off plays well. On defense he was able to create some havoc. He was one of several young talented players from Delaware.

Amir Williams Forward (Delaware)- One of the rare true big men at this event. Williams surprisingly showed touch, soft hands and developing foot work. He didn’t waste time trying to dance around the perimeter but instead he got on the blocks and did damage. He looks like he has a bright future.

Karon Bailey Guard (Maryland)- The 4th Grader didn’t mind play up as he showed he could stroke it from anywhere on the court. He’s a young warrior and we will definitely be keeping an eye on this kid.

Jashaun Jones Guard (New York)- The NY product had one of the best handles I saw on the grade level. He zipped through the defense and displayed great court vision while hitting teammates in the half court or on the fly.
Posted by basketball spotlight at 10:18 AM