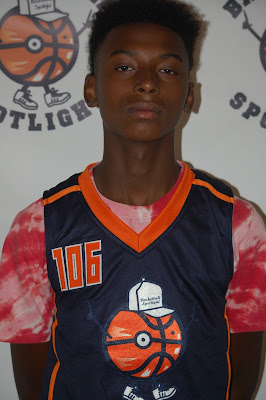 The Basketball Spotlight Future Phenom Camp is in the books. The top talent in the country brought their game to District Heights, MD and we have tons of coverage to release. The Class of 2022 is the most loaded group at this event. Here’s Part 1 of our rising 7th Grade report.

Jaden Bradley Guard (North Carolina)- Entering the camp there was some debate on who was #1 in the class and Bradley made a strong case. The lanky guard did it all in terms of scoring, rebounding and setting up teammates. He has that extra gear that some players don’t possess. He sees plays develop before others and delivers the dime on time. He had a great showing during the Middle School All American Game and dominated camp action. His coach Ro Russell has coached some of the best and totally raved about Bradley’s play. 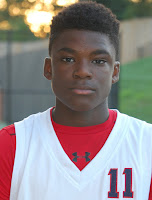 Jarace Walker Forward (Pennsylvania)- Walker didn’t everything for his team. He played three positions and made his mark from start to finish. I like how he rebounded the rock and started the fast break himself. He can hit the open trey or create space off the dribble. His physical strength allows him to burst through the defense and finish in traffic. He definitely has made the full transition to the wing and now his size might determine which perimeter spot he settles in at. His play earned him Top 5 camp honors.

Tyler Hawkins Guard (New York)- Hawkins plays with that throwback passion and stood tall on the floor with America’s best. He ran the show for his team but still find enough room to get buckets when needed. He’s a bulldog on defense and takes him personal when other guards invade his space. The Big Apple native proved that not only can he play with the best but also shine on the biggest stage. He really increased his stock.

Trey Thomas Guard (Maryland)- Thomas shot up a few inches from last year as he reclassified into the Class of 2022. When he was motivated he scored at ease from the wing position and looked very smooth. He does have point guard attributes and will most likely settle into that position when the smoke clears. He’s in a great situation with Team Takeover and they will help him continue to develop.

Chris Livingston Guard (Ohio)- The Ohio native relishes in his role of getting out on the break and finishing. Some players have the knack of getting to the rim and you can pencil him in as one of them. Livingston got big time buckets during the Middle School All American Game and that carried over to Saturday at the Future Phenom Camp.

Quin Clark Forward (Virginia)- Clark is still developing into his body and a position. Right now I like how he runs the floor, rebounds and plays the game with great energy. He can put together a few moves and is developing footwork. I can’t peg him into a position yet but the more his ball handling develops the better chance he will have on the wing.

Darryl Simmons Guard (Connecticut)- Just by watching Simmons it’s apparent that he’s an East Coast point guard. He has the old school playground handle and doesn’t back away from the challenge of playing against bigger competition. I like how he sets the tempo and distributes the rock when necessary.


SUPER SKILLCASE 2016 COMING IN NOVEMBER
Posted by basketball spotlight at 8:26 AM